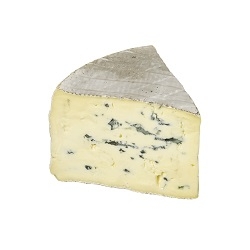 This delicious, rich and creamy blue cheese with a soft white bloomy rind is made in the Allgau region of Bavaria, in north east Germany. This area of Bavaria has a strong tradition of dairy farming that dates back over 300 years and the unique flavour of the cheese is due, in part, to the rich pastures that the cows graze on. Bavarian Blue is a triple cream soft cheese making it particularly rich and decadent. Through using a cold maturation process, the cheese gradually develops an aromatic spicy flavour whilst maintaining a creamy, buttery consistency. It is traditionally eaten in Bavaria as part of a hearty breakfast or as a snack with bread. It works very well with warm meals such as gratins and in sauces.

Frances says: “Bavarian Blue is one of my favourite blues to enjoy at this time of year. With the cold weather drawing in this creamy, rich blue is perfect on a cheeseboard or in a warm winter salad. To truly bring the best out of Bavarian Blue, I like to pair it with Paxton’s Creamed Honey with Walnuts and a Cornish Buttermilk Biscuit. The sweetness of the honey perfectly complements the creamy base of the cheese.”