A thorough understanding of the cheesemaking process is so important for our team of talented cheesemongers, so we’re incredibly thankful to Tom Calver and his Westcombe Dairy team for inviting our Quality Manager Jazz to make a batch of Duckett’s Caerphilly in June. After its 6-week maturation period in the Caerphilly maturation caves, we’ve bought the whole batch for our cheese counters. You can read Jazz’s cheesemaking story below and find out more about the work that goes into handmaking your piece of artisan Duckett’s Caerphilly… 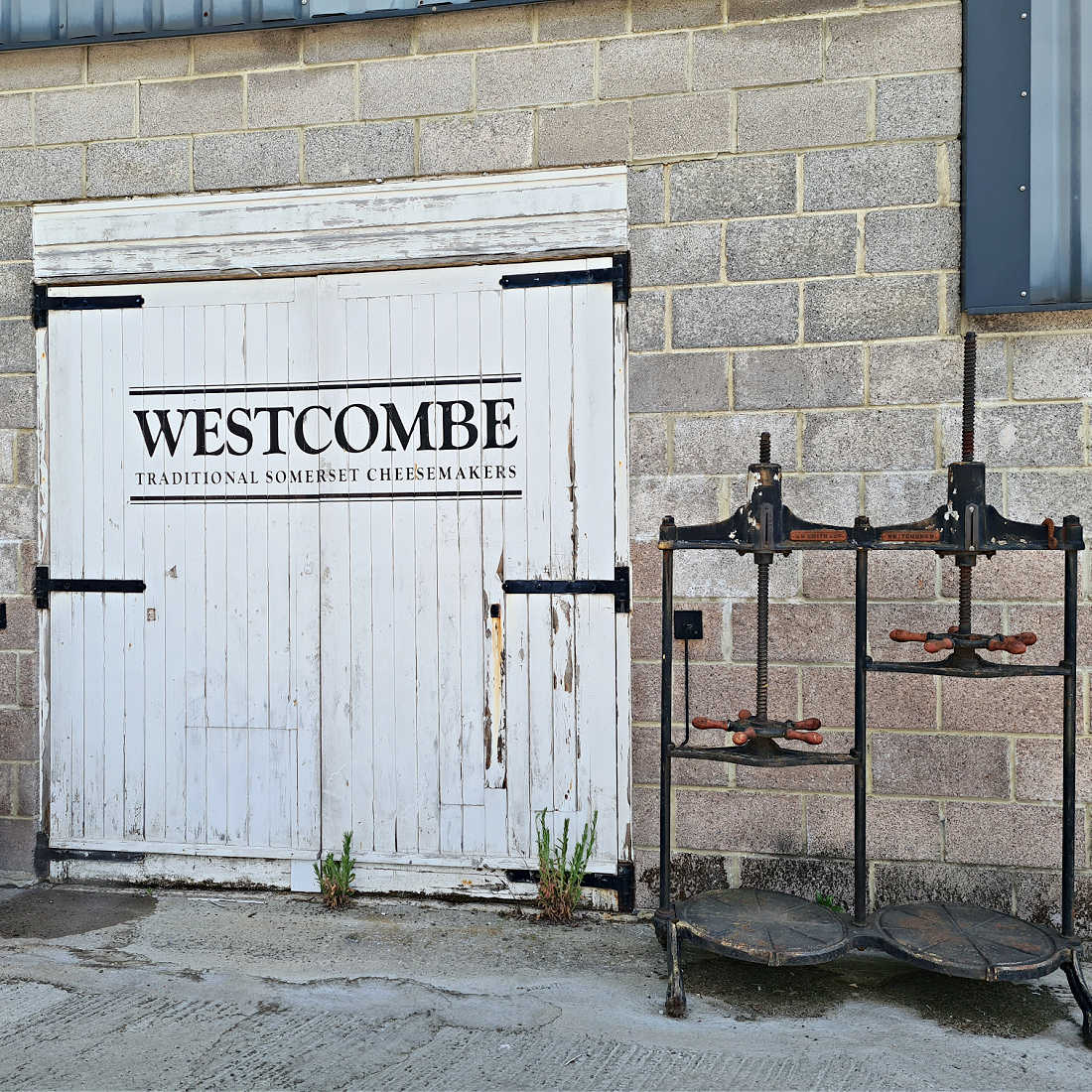 When the idea of travelling down to Westcombe Dairy to make a batch of their Duckett’s Caerphilly cheese was put forward, I jumped at the chance. Making this batch of cheese meant that I would see the product through its life span; from milk to our cheese counters – how exciting!

I travelled down to deepest, darkest Somerset the evening before the make (cheesemaking means early mornings) and stayed over in a converted Shepherds Hut situated in the garden of Tom and Mel Calver. The evening was spent drinking local beer, jumping on the trampoline with the children and eating delicious homemade carbonara with Tom and his family. An idyllic evening in the countryside.

After an early morning rise, I was ready to head over to the dairy and start the cheese-making journey. After donning the ever so flattering white trousers, polo shirt, hair net and wellies, it was time to scrub in, pop on an apron and begin. 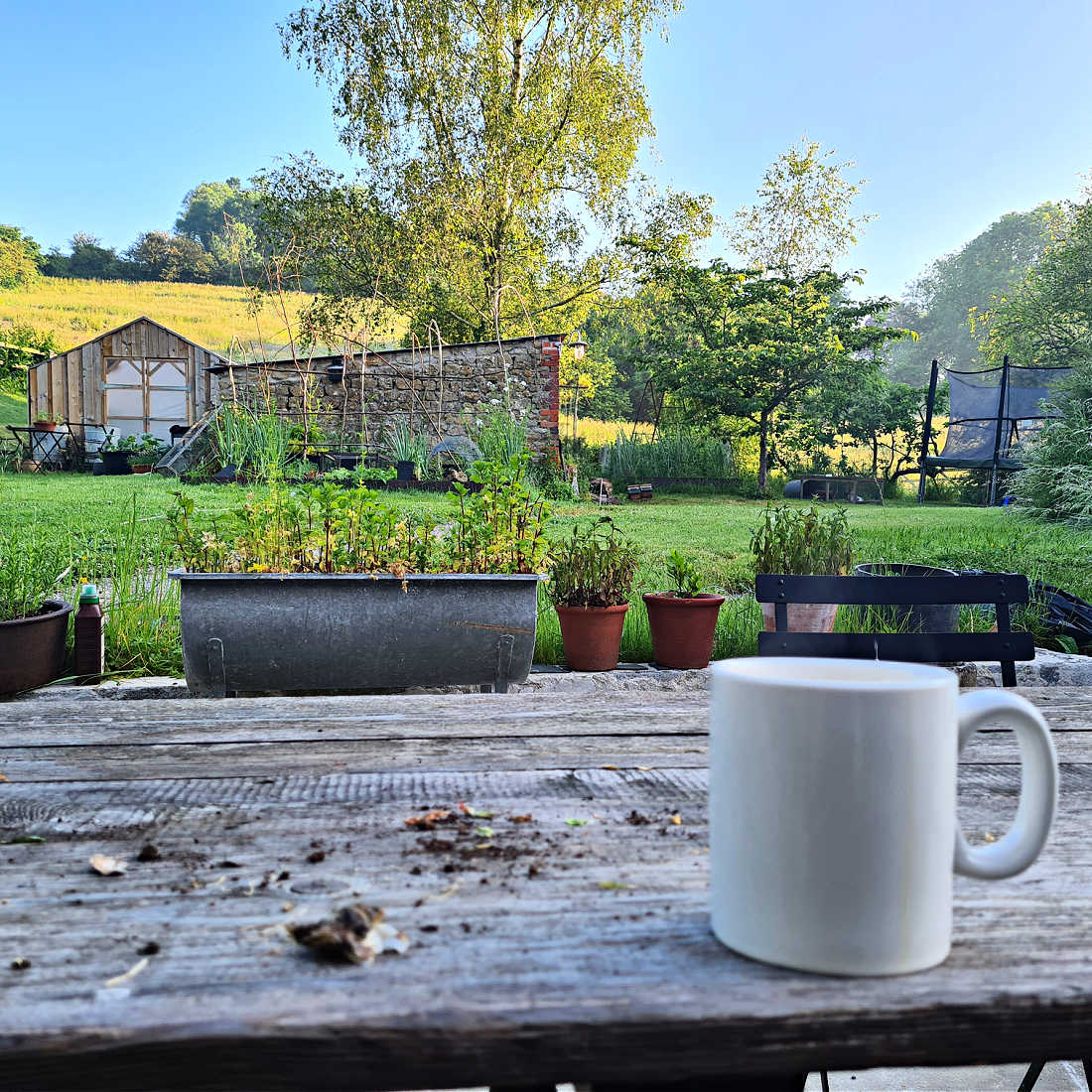 The make began with the pasteurisation of the milk, which was pumped into the pasteurising machines in the making room. Once the milk was heated to the correct temperature, it was pumped into the big steel vat. A lot of milk is needed to make cheese, and 1500 litres of milk was pumped slowly into the Caerphilly making vat. Next, the rennet was added and stirred slowly by hand, followed by the starter culture. The mixture was stirred slowly with, what can only be described as a “big white spoon”. After around 30 minutes of stirring, the milk was left to set – during this time we grabbed a quick cup of tea (artisan cheesemaking is thirsty work)!

After around 15/20 minutes, the milk had set into a jelly-like substance (or junket if you want to get technical), a metal “curd cutter” was slowly pulled along the vat vertically, slicing the set mixture into long strips, being careful not to overlap cuts. The same was then repeated horizontally – creating squares of curd floating in the whey. 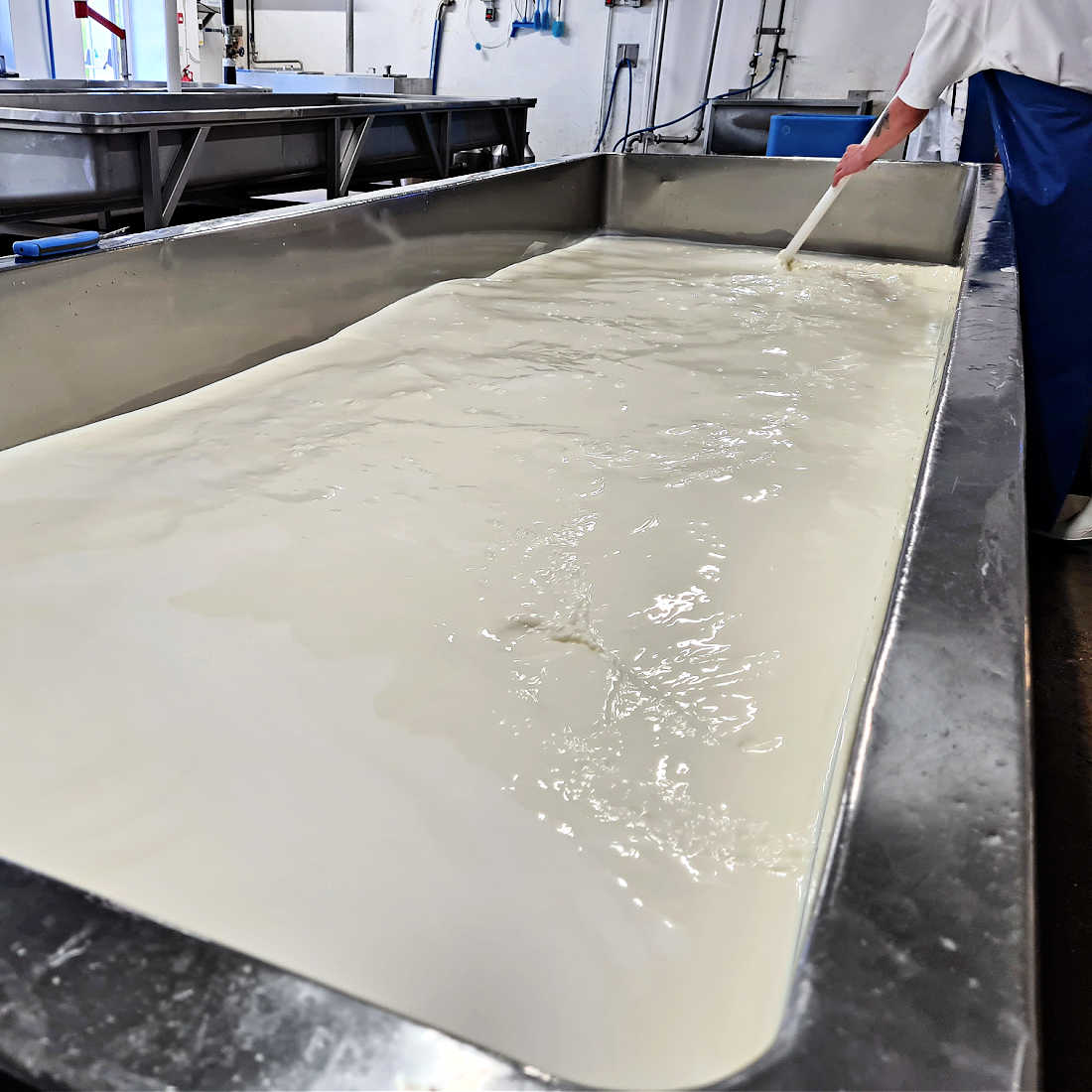 Next, it was time to get even more hands-on! The curds and whey mixture needs to be slowly stirred by hand, which meant bending over the vat and slowly bringing the mixture from the bottom to the top – breaking up the big chunks of curd as gently as possible. It was important to be delicate with the curd to create a moister cheese in the end. These soft curds were then drained – this is a long and laborious process of cutting the blocks of curd by hand, stacking and turning them to help the whey drain off (the whey was then piped into a separate, very hot room, where it’s made into delicious Ricotta!). 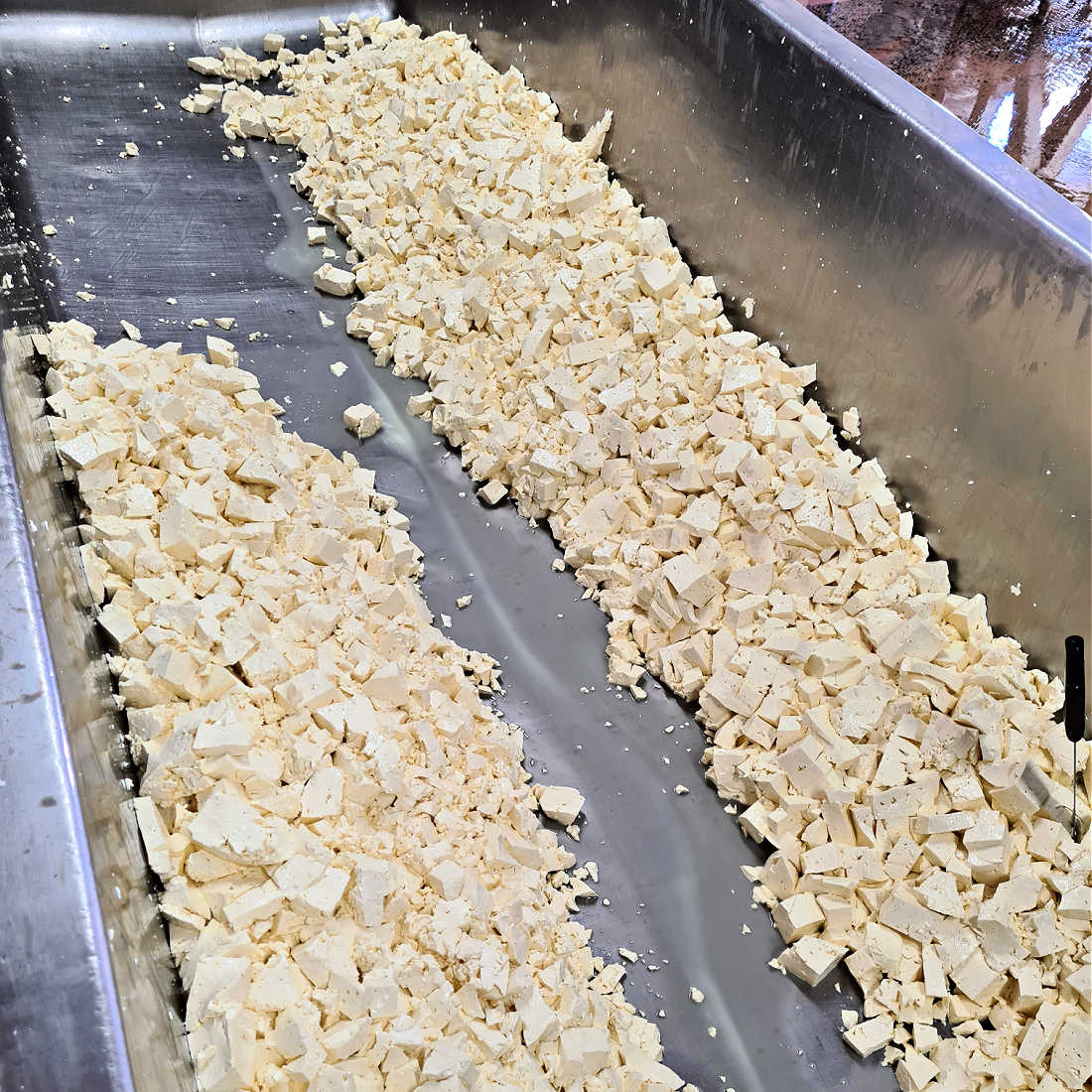 Once drained, the curd was salted and we began the first filling of the moulds. We leant over the vat and filled the cheese moulds by hand, which were stacked on each other in the vat in rows of 4 to help drain out any residual moisture. Once all the curd were popped into the moulds, they were transferred into the ancient cheese press (from the 1800s) for their first pressing of the day.

Now it was in the hands of the team at Westcombe to look after the cheeses whilst I eagerly awaited the 6 weeks for the ever-glorious moulds to form on the rind and the flavours to develop. 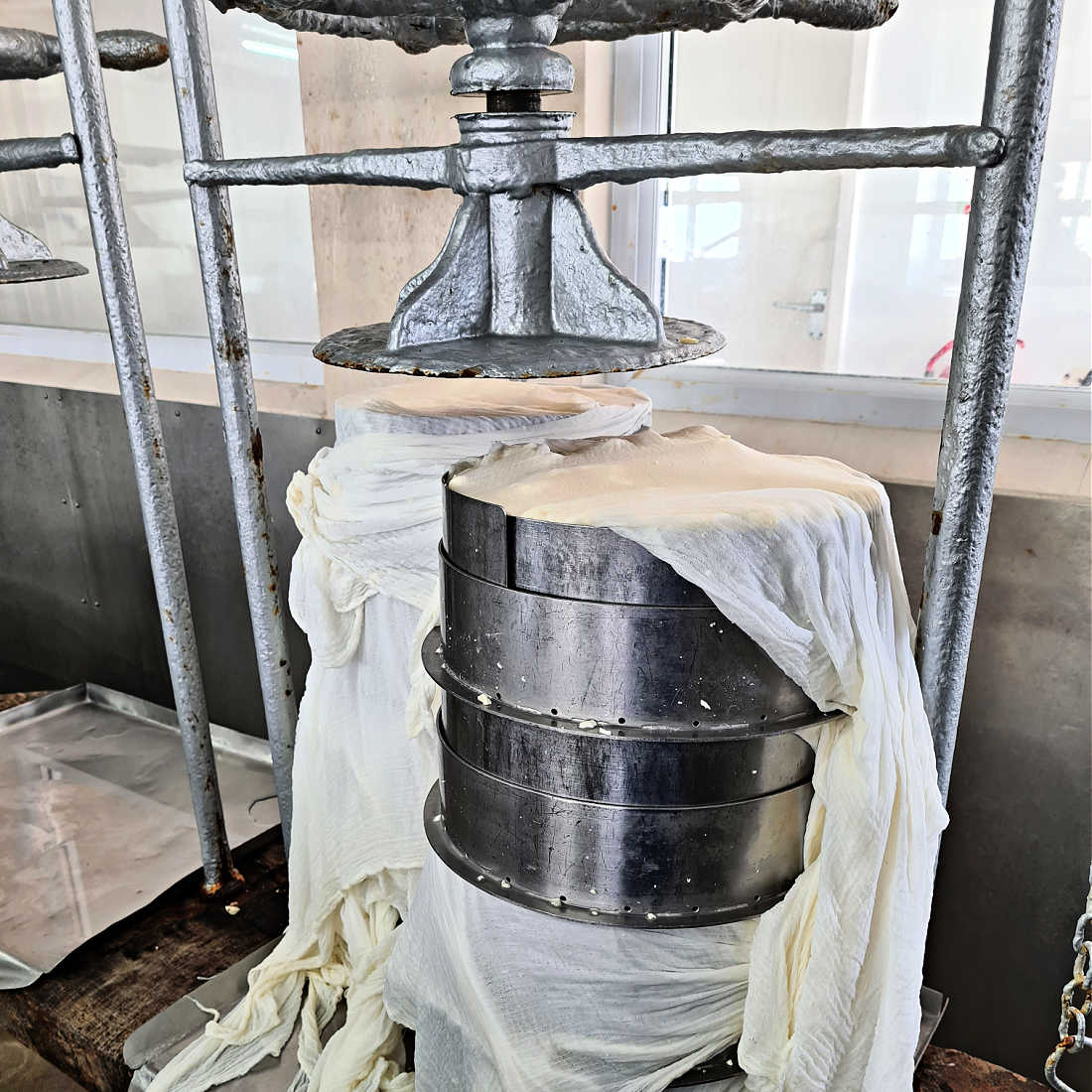 The cheese was packed onto chilled transport from Somerset to arrive at our Cotswold cheese rooms in Bourton on the Water. My team happily obliged to taste the first piece with me and we were delighted with the results. The finished cheese is light and delicate -the texture is crumbly in the centre and more squidgy towards the rind (this dual texture is to be expected in a piece of Caerphilly). The flavour overall is bright and juicy. The centre of the paste is milky - it's fresh, acidic and yoghurty, with notes of crisp grass and lemon. The squidgy, outer paste is earthier, with more buttery and mineral flavours. 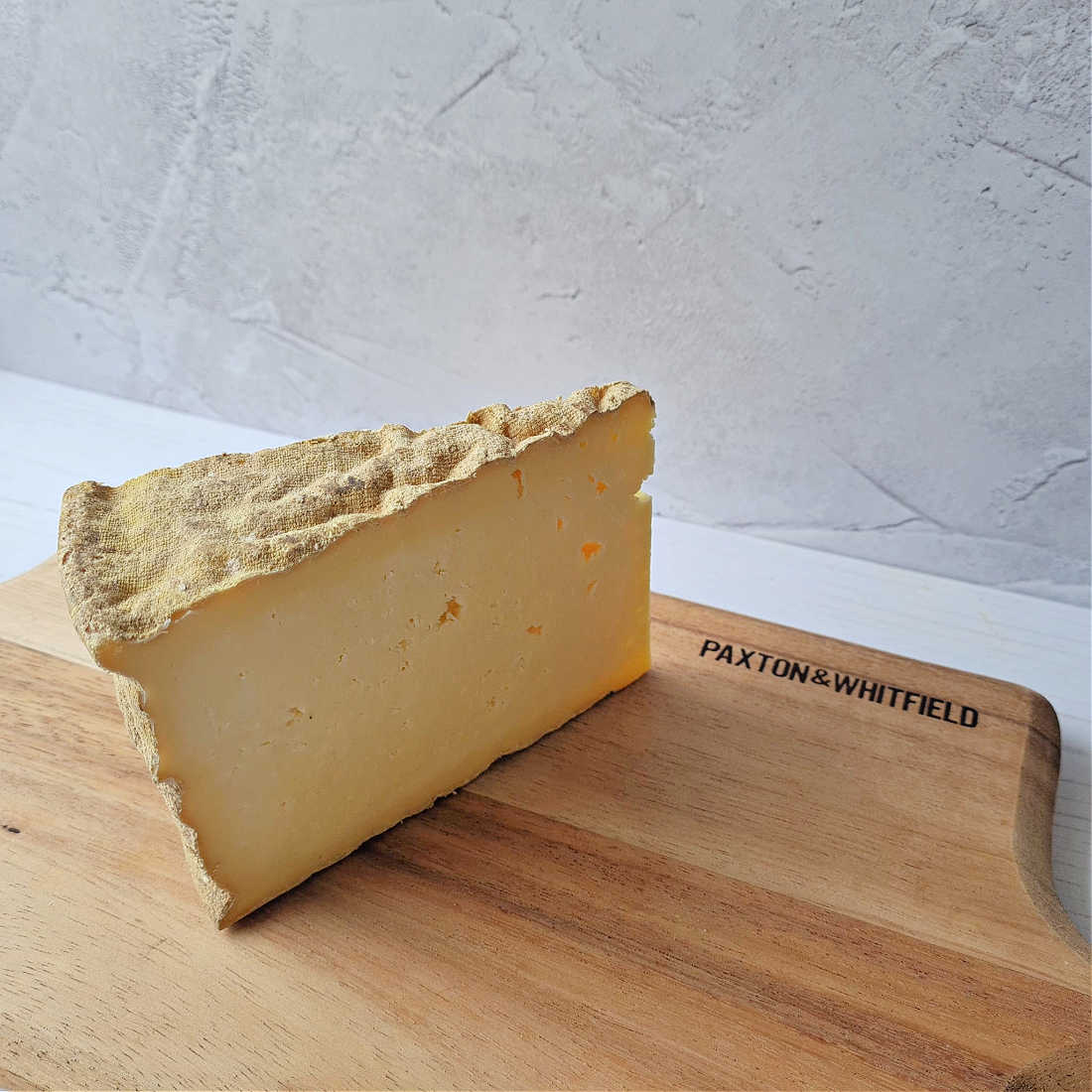 This batch of Duckett's Caerphilly was specially made for our Cheese Club, however, we have a limited amount for our online cheese counter and shops in London and Bath – taste Duckett’s Caerphilly.