Westcombe Cheddar PDO and Ducketts Caerphilly, among others. The weekend is a chance for members of the SCA to meet up, share ideas, socialise and of course, eat cheese together. ">

Each year a different dairy holds the annual Specialist Cheesemakers Association (SCA) farm visit. This year was the turn of Westcombe Dairy, home to Westcombe Cheddar PDO and Ducketts Caerphilly, among others. The weekend is a chance for members of the SCA to meet up, share ideas, socialise and of course, eat cheese together. 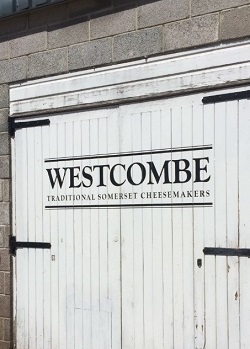 Throughout the day there were various tours; a farm tour, dairy tour and a tour of Wild Beer Co. (a craft brewery based at the farm), alongside technical talks and a cheese tasting with the makers of the cheeses. This was followed by an evening meal and the presentation of two awards; The James Aldridge Memorial Award and The Dougal Campbell Bursary.

The family behind Westcombe Dairy, the Calvers, are one of only three truly artisanal Somerset cheddar makers and have PDO status (Protected Designation of Origin) for their Westcombe Cheddar – this means there are rules around the production of their cheese. They must use raw milk from their own herd, use traditional rennet not vegetarian, and use pint starters rather than the more commonly used powdered starters. 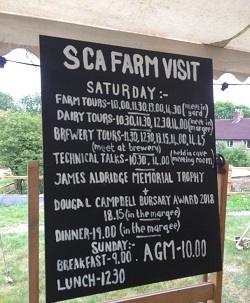 At Westcombe they are lucky enough to have their own farm which is home to their herd of Holsten-Friesian cows, who graze very close by to the dairy.  Everything they do in regards to farming comes back to maximisingthe natural qualities of the raw milk that is used to create their cheeses - from the wellbeing of the cows to the quality of the pasture.  The farm is in the beautiful (and very hilly) Somerset countryside, and Tom believesa lot of the flavour of the Cheddar comes from the terroir of the land - when you tast Westcombe Cheddar you are tasting Somerset.

The milk arrives fresh into the dairy in the morning and is still warm when it hits the vats.  The milk is then heated and the traditional starter culture and rennet are added.  The curds are then cut and drained and the cheddaring process can begin - a process done completely by hand, involving the stacking and turning of the slabs of curd.  Once these slabs are ready, they use an old peg mill to mill down the curds, which tears rather than cuts the curds to give the Cheddar a more natural texture.  Salt is then mixed in and the curds are pressed into traditional cylindrical Cheddar moulds where they are cloth-bound and rubbed with lard and later transferred to the start of the art maturing caves. 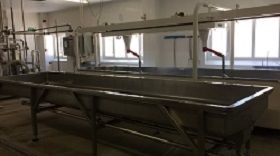 Westcombe dairy houses the only Cheddar cave of its kind in the UK.  It is a cave built into the hillside, modelled on that of Comte affineurs in France, with the main structural elements of the cave having been cast in the French Alps!  At the press of a button, the door opens to reveal a room housing rows and rows of Cheddars, towering to the ceiling, holding up to 5000 cheeses at any one time. 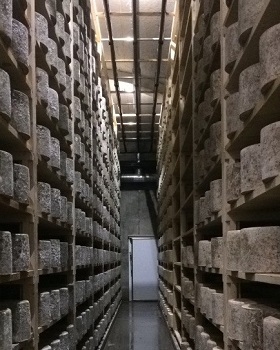 Working hard in the awesome cave is 'Tina the Turner'. Tina is the world's first cheese turning robot, a piece of technology that has completely revolutionised the way the store is looked after, increasing productivity and allowing higher quality control.

After the tours the afternoon held the opportunity for cheesemakers to get honest feedback from their peers and try out experiments and new products.  We all sat in groups, and the tasting was run in the style of "speed dating" insofar as 7 cheesemakers had 10 minutes to present their chosen cheeses to each group, working their way around the room in turn.

This was a really interesting session with one of our personal favourites being the tasting session run by Robin from Cropwell Bishop who presented us with two versions of their famous Stilton, one made with traditional rennet and the other from vegetarian.  We had to taste the cheeses and decide which we thought was which, discussing the difference in flavour and textures.

Before the evening meal the James Aldridge Memorial Award for best raw milk cheese and Dougal Campbell Bursary were presented.

The Dougal Campbell Bursary was awarded to Chedworth Dairy who have moved from making cheese in their South London Kitchen to developing their own raw milk, Double Gloucester in Gloucestershire near the Cotswolds. 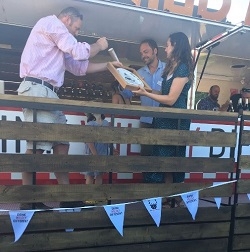 The evening meal was held in the marquee, with everyone sitting on long tables made from old Cheddar maturing boards.  The dinner was sharing plates of whey butter, local bread, local produce and even an old dairy cow for the main course.  The final course was Westcombe Ricotta with blackcurrant and whey caramel, which was utterly delicious.  Alongside the great food, Wild Beer Co provided us with beers paired to each course, all of which perfectly complimented the food. 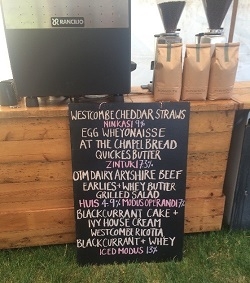 The following morning it was time for the AGM where matters from the past year were discussed, whilst we all enjoyed freshly made coffee with raw milk from Cheshire makers, Appleby's.

Overall it was a great weekend and to have the opportunity to meet and chate to some of the best cheesemakers in the Country was so rewarding.  The sun shone all weekend and we learnt a great deal about cheesemaking, cheese tasting and the cheese industry, whilst surrounded by the beautiful Somerset countryside.  Westcombe Dairy were brilliant hosts and were so welcoming to us all.