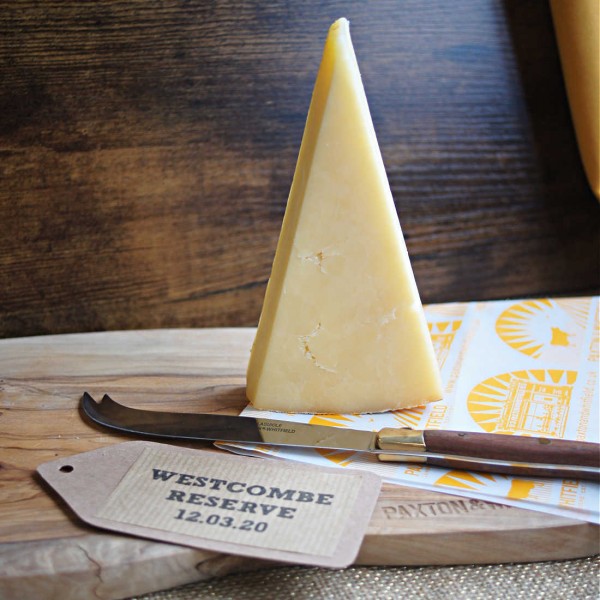 Deliciously creamy with an earthy flavour, full body and notes of warm toasted nuts. Our specially-selected Westcombe Reserve Cheddar has been aged for over 18 months for a stronger flavour profile. Our cheese buyers selected a single day’s make of cheese, from the 12th of March 2020 to create this special profile especially for Christmas 2021.

Westcombe Reserve has a deep complex flavour with a mellow lactic tang and long notes of citrus, hazelnut and caramel. The texture is structured and firm, with a smooth breakdown that keeps the flavours lingering on your palate. This cheese is often called a 'five mile Cheddar', as you’re still tasting it five miles down the road and our specially-aged batch has an even longer flavour!

Made by Tom Calver of Westcombe Dairy in the Batcombe Vale of Somerset using the milk from the Friesian cows farmed by his father. This farmhouse cheese-making business has been making its renowned cheddar since1890 and now make over 100 tonnes of Cheddar a year, all of which is made to the highest quality using traditional methods.

Tom Calver of Westcombe believes the success of his Cheddar lies in their ability to exploit the local Westcombe terroir and letting it enhance their cheese making. From the richness of the milk to the special conditions of their cheese ageing room, everything they do revolves around letting the milk express itself in the finished cheese.

Westcombe Cheddar is one of very few cheddars to be made by hand in the Westcountry using traditional rennet, unpasteurised milk and pint starters - something that qualifies it as a Westcountry Farmhouse Cheddar which is Protected Designation of Origin (PDO).

Cheddar is undoubtedly the UK’s most popular cheese, outselling British and Continental counterparts, yet so often it is thought of as a cooking or an everyday cheese. Similar European hard cheeses, like Comte, are regularly selected for cheeseboards and special occasions. Over the last few years, Tom Calver and his team at the award-winning Westcombe Dairy, Somerset, have made several big decisions to improve the quality of their cheese. Lots of these decisions have been in the field, rather than the dairy, one of them being to farm in a more sustainable, regenerative way. These decisions have resulted in some of their best ever batches of cheeses.