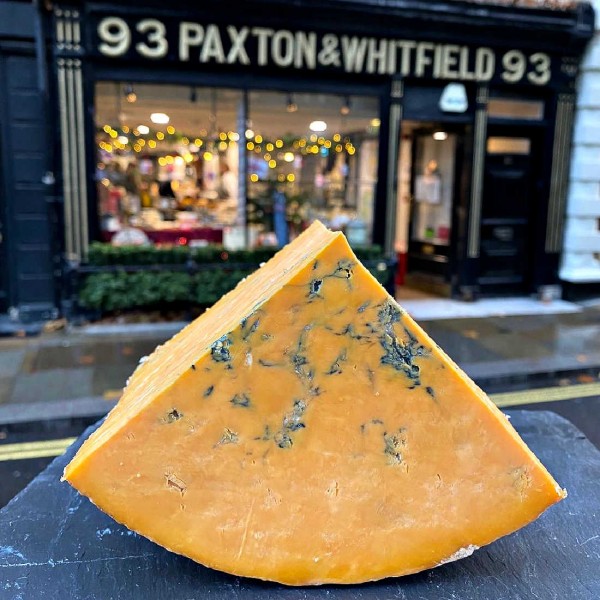 A smooth textured blue cheese with a rich, rounded flavour and distinctive blue veining through the russet interior.

Shropshire Blue is a distinctive looking cheese that is not dissimilar in taste to Stilton, although firmer in texture. The cheese has a warm russet colour to it from the addition of the natural colorant, annatto, which contrasts nicely with the dense blue veining that is found throughout the cheese. It is an excellent cheese on a cheeseboard because of its distinctive colour and mellow, blue taste.

Despite its name, Shropshire Blue originated in Scotland and is generally made now in Leicestershire, Nottinghamshire or Derbyshire. There is a lack of a convincing explanation for the name of this cheese because as far as can be ascertained, the product has never been made in Shropshire. Our Shropshire Blue is made by Cropwell Bishop, a family run creamery in Nottinghamshire.

To make Shropshire Blue, evening and morning milk are blended together and a starter culture is added, along with vegetarian rennet and the blue mould culture, penicillium roqueforti. The curds form and the whey is drained off before the curds are transferred from the vat to the 'table' where they are left to settle overnight. The following day they are milled, salted and transferred by hand into cylindrical moulds.This is the stage when the cheeses begin to form and after a week in the moulds they are removed and the rind is smoothed down. They spend a further four weeks in the ripening room before being pierced with stainless steel needles whereby air can reach the interior of the cheese and encourage the spread of the blue moulds and the characteristic blue veining. The cheeses can then be kept until the desired maturity is reached.

Monbazillac
Dessert Wine for Cheese The Paxton & Whitfield Monbazillac shows its quality over many others with the underlying vein of fresh, fruity acidity which cuts through the sweetness to stop the wine from being cloying as some can...
Details
Traditional Wholegrain Oakcakes
Wholegrain Artisan Oatcakes for Cheese These delicious wholegrain oatcakes are fine-milled with a delicate and crispy crunch for a satisfying pairing with artisan cheese. They are specially hand-made for Paxton &...
Details
Spiced Apricot, Cranberry & Orange Chutney
Deliciously Fruity Spiced Apricot and Cranberry Chutney A deliciously bright and fruity chutney, with a warming spice. This hand-prepared chutney is slow-cooked with onions, garlic and ginger, then subtly spiced for a perfect pairing...
Details
Stilton
Finest English Stilton Paxton & Whitfield were one of the first cheesemongers to bring Stilton to market in the UK and Stilton is still our best-selling cheese. Our Stilton today is made by Cropwell Bishop in Nottinghamshire and...
Details
Red Leicester - Sparkenhoe
Raw Milk Farmhouse Red Leicester Cheese The flavour of the cheese is nutty and complex, with deep caramel and liquorice undertones which completely set this cheese apart from generic Red Leicester. Annatto, a natural...
Details