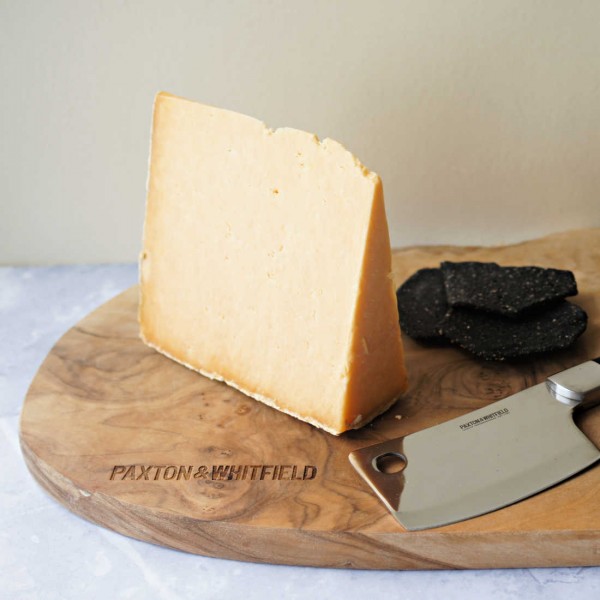 A traditional cloth bound Cheshire cheese that matures to a delightful crumbly texture and offers a  rich, clean flavour in the mouth.

Cote De Duras Merlot Cabernet Full Bottle
Cote de Duras Red Wine for Artisan Cheese Youthful fruit characterises this wine from Cotes de Duras, but it is balanced by depth of flavour making it an excellent wine for all occasions. Merlot predominates. Only available to...
Details
Cornish Buttermilk Artisan Biscuits for Cheese
Cornish Buttermilk - Artisan Biscuits for Cheese These crisp & wholemeal biscuits for cheese are enriched with Cornish Buttermilk & Whey. They are specially hand-made for Paxton & Whitfield by an artisan bakery in the...
Details
Golden Cross
Golden Cross is made by Kevin & Alison Blunt of Golden Cross cheese in East Sussex. The farm is home to a herd of 230 Goats who are milked all year round producing the milk for this delicious, handmade, award winning cheese....
Details
Fig Ball
Delicious figs from Southern Italy, that have been slowly baked and wrapped in their own leaves. A perfect accompaniment to any cheeseboard or cold meat selection. These fig balls are baked low and slow for a delicious caramelised...
Details
Fig and Walnut Conserve
A rich and sticky Fig paste with Walnuts. To taste it is thick and fruity, but not too sweet, extremely figgy, with the walnuts coming through to balance. Handmade in the French Pyrenees by an artisan producer, this product is exclusive...
Details