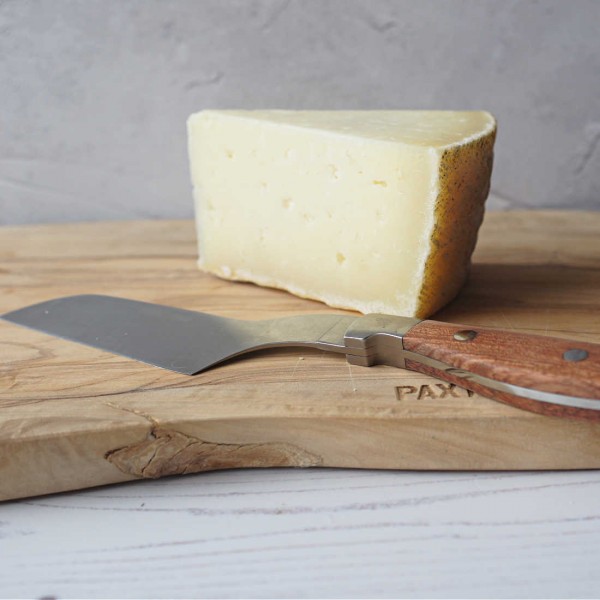 This Manchego Villarejo is nutty with a savoury sweetness, while being full flavoured, fruity, buttery and clean.

Our Manchego comes from the Cuenca region of Spain - made by a family dairy business with unpasteurised milk collected from the dairy's own herds and local farms.

Our cheese buyer has selected this cheese for its juiciness and supple texture, a bold and rich cheese with notes of blanched almonds and roasted hazelnuts. This cheese is best enjoyed with quince and a fruity Rioja. A truly artisan Manchego, with limited production, resulting in subtle, yet complex flavours.

Manchego was produced and consumed a number of centuries BC. Although it is not known how the cheese was made by our ancient ancestors, it can be said that the taste was probably very similar to the cheese eaten today, and that the methods of production were, without a doubt, similar to those used now. The cheese is named after the breed of sheep, whose milk is used in the production of the cheese, who are in turn named after the area from which they originate ‘La Mancha’. The history of Manchego cannot be told without mentioning the famous work ‘Don Quixote’ by the writer Miguel Cervantes. It is known that Don Quixote found great inspiration in the delectable cheese when writing his book. This book is one of the reasons that Manchego cheese is so gastronomically important, and popular.

Cote De Duras Merlot Cabernet Full Bottle
Cote de Duras Red Wine for Artisan Cheese Youthful fruit characterises this wine from Cotes de Duras, but it is balanced by depth of flavour making it an excellent wine for all occasions. Merlot predominates. Only available to...
Details
Farmhouse Butter - Artisan Biscuits for Cheese
Farmhouse Butter - Artisan Biscuits for Cheese These light and buttery biscuits are mellow & buttery - with a satisfying snap to accompany any style of cheese. They are specially hand-made for Paxton & Whitfield by an artisan...
Details
Berkswell
Award-winning British Berkswell Cheese Berkswell is pyreneean in style, with a rustic, orange-brown crust. It is renowned throughout the British Cheese Industry as one of the most delicious, consistent quality ewes' milk cheeses...
Details
Quince Cheese
Sliceable Fruit Preserve to enjoy with Cheese A solid, sliceable fruit preserve; known as "Membrillo" in Spain, this finest Quince is made only from natural ingredients. A perfect companion to many cheeses especially Manchego. Also...
Details
Fig Ball
Delicious figs from Southern Italy, that have been slowly baked and wrapped in their own leaves. A perfect accompaniment to any cheeseboard or cold meat selection. These fig balls are baked low and slow for a delicious caramelised...
Details