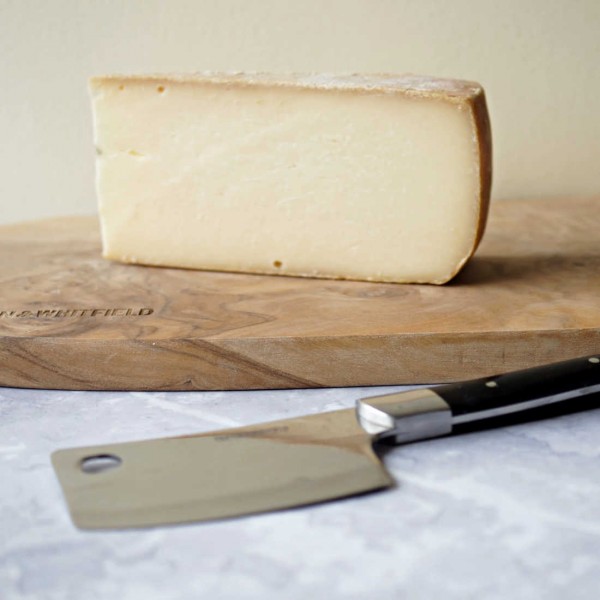 £10.00 per 250g
Unpasteurised Traditional Rennet Cow
No bundles available for the selected variant. Please select another variant for bundle offers.

Originally, Raclette was made only in the Swiss canton of Valais. Its production there dates back over 100 years, and the shepherds made it from raw milk in their mountain huts. More recently, however, it became more difficult for the Valais region to meet the increasing demand for the cheese and in consequence, Raclette has become a generic term for a number of similar Swiss and French cheeses made from the mountain pastures. Paxton & Whitfield Raclette is from Savoie and made entirely with raw milk supplied by the farmers of the five communes of the Chambotte Massif, and matured by exceptional affineur Joseph Paccard.

Raclette is made by mixing the milk, rennet and cultures and then draining, heating and pressing the curd. The natural crust is then brushed every two days for four weeks and for the next month it is cured and brushed weekly. It cannot be sold until it has ripened for at least eight weeks, is optimum after a maturation period of around 5 months and is best enjoyed through the autumn and winter months.

Primarily, Raclette is used to make one of the best and most famous of cheese dishes, the eponimous, Raclette; the French word 'racler' meaning 'to scrape'. A Raclette cheese is cut in half with the rind removed from near the cut surface. The cut edge is then heated, traditionally over a wood fire, but in recent days using a half-moon shaped electric heater made specifically for this purpose. As the cheese melts, it is scraped off with a spatula or knife on to a plate over potatoes, pickles and meats.

Cote De Duras Merlot Cabernet Full Bottle
Cote de Duras Red Wine for Artisan Cheese Youthful fruit characterises this wine from Cotes de Duras, but it is balanced by depth of flavour making it an excellent wine for all occasions. Merlot predominates. Only available to...
Details
Cote De Duras Sauvignon Blanc Full Bottle
Cote de Duras White Wine Perfectly Paired with Cheese A vibrant white wine with plenty of exotic fruit aromas and a soft round palate that finishes with a lovely zingy freshness. Drink on its own as an aperitif or with cheese. Only...
Details
Paxtons Raclette Heater
Raclette is a traditional dish originating in the French and Swiss Alps. The name Raclette comes from the French verb, racler, meaning to scrape. Typically the meal involves diners melting Raclette cheese and scraping it onto potatoes,...
Details
Paxtons Cheesemongers Favourite Knife - Cheese...
A strong and stylish Cheese Knife, with a stainless steel blade and a riveted rosewood handle. The angled and stepped offset blade allows a clean, controlled cut through both hard and soft cheeses, making it our cheesemongers' favourite...
Details
Sweet Cucumber Pickle
This traditional pickle is handmade in North Yorkshire. Made to an old fashioned recipe that dates back to war time. A treat with hard cheese, cured meats and smoked salmon
Details