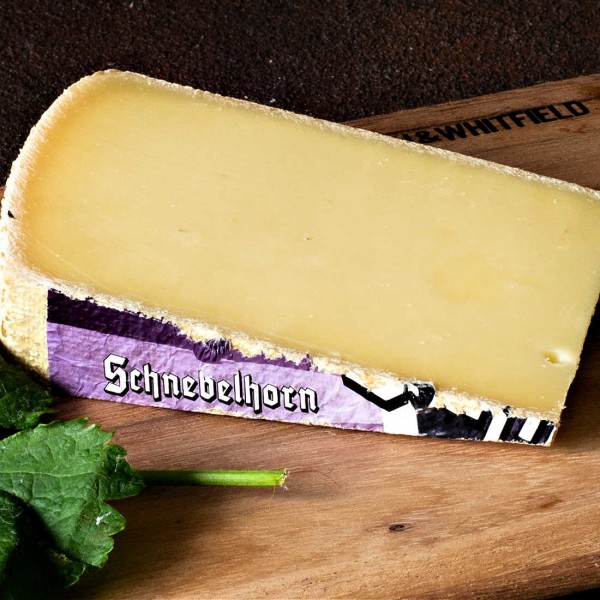 A hard, creamy, Swiss cheese with a satisfyingly sweet flavour.

Schnebelhorn cheese is made with added cream, creating an intensely rich and toothsome texture with a fantastic umami flavour. Made with milk exclusively from cattle that have been grazing on high altitude pastures, the wheels of cheese weigh around 6kg each. We’ve selected an 8 month age profile because we feel that this best suits the cheese - it’s nicely balanced between a fudgey rich texture, whilst being full of character with a flavour that goes on and on.

This fantastically named cheese is so called thanks to the highest peak in the region from which it hails. The Guentensperger family have been making cheese for three generations, traditionally making the classic cheese Appenzeller. Due to the quirk of the Appenzeller PDO, only a limited amount of cheese is allowed to be produced each year and so the cheesemakers have focussed their attentions on making interesting and unusual cheeses that still have that alpine quality that is so loved.

Ale No 93
A superb ale of great character. Golden colour with a spicy hop character, soft fruitiness and some strength. A great partner to cheese. Only available to customers aged 18 and over. Our No.93 Ale is brewed by ex-Brakspear head brewer...
Details
Cote De Duras Sauvignon Blanc Full Bottle
Cote de Duras White Wine Perfectly Paired with Cheese A vibrant white wine with plenty of exotic fruit aromas and a soft round palate that finishes with a lovely zingy freshness. Drink on its own as an aperitif or with cheese. Only...
Details
Original Cracker
These crackers are a real all-rounder. Their mellow flavour complements stronger partners such as Cashel Blue, while their satisfying snap lends itself well to buttery cheeses such as Brie de Meaux and Rollright.
Details
Fig Ball
Delicious figs from Southern Italy, that have been slowly baked and wrapped in their own leaves. A perfect accompaniment to any cheeseboard or cold meat selection. These fig balls are baked low and slow for a delicious caramelised...
Details
Fig and Walnut Conserve
A rich and sticky Fig paste with Walnuts. To taste it is thick and fruity, but not too sweet, extremely figgy, with the walnuts coming through to balance. Handmade in the French Pyrenees by an artisan producer, this product is exclusive...
Details