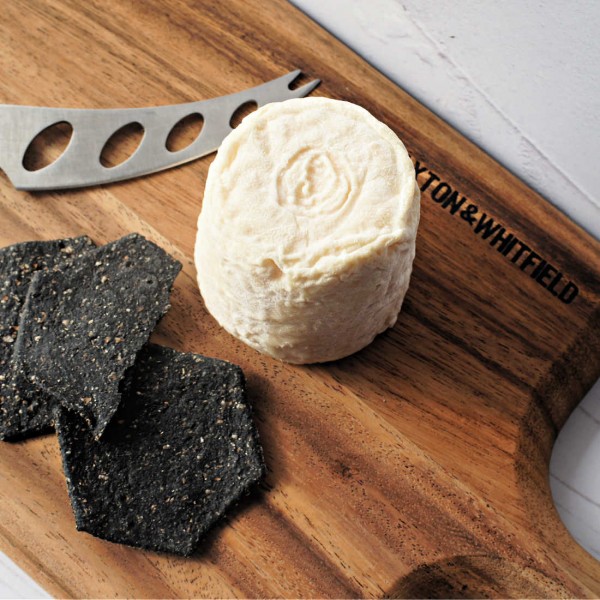 French goats' milk cheese from one of the most significant goat rearing regions; Poitou Charante area.

When young, Chabichou du Poitou is white and fresh with a delicate aroma and taste. As it ages past 10 days, it picks up natural blue and grey moulds in the rind. Its texture becomes more crumbly and the flavour becomes sharper, with a stronger taste of goat's milk.

The Moors, who occupied the Poitou region in the 8th Century until they were defeated at the Battle of Poitiers in 732AD, are said to have bred goats and made cheese fromt heir milk. It is from the Arabic word for goat, "Chabli", that this cheese has taken its name.

Now the Poitou Charente area of France is one of the most significant goat rearing regions, with both farmhouse and industrial cheese production taking place. This Chabichou is a "fermier" or farmhouse cheese and comes from the producer Georgelet, who learnt the traditional cheese making methods through watching the women of his village making cheese as a child.

It takes 1 litre of milk to make every individual Chabichou. The curds are not cut or heated to encourage the draining of the whey but delicately ladled into small moulds with fine holes in the sides and the base that allow the whey to drain.

Charcoal Cracker
Our delicious new Biscuits for Cheese are the ideal accompaniment to a cheese board. They are produced by an artisan bakery in the heart of the West Country, using the finest ingredients to brand new, exclusive recipes, developed with...
Details
Golden Cross
Golden Cross is made by Kevin & Alison Blunt of Golden Cross cheese in East Sussex. The farm is home to a herd of 230 Goats who are milked all year round producing the milk for this delicious, handmade, award winning cheese....
Details
Brillat Savarin Affine aux Truffes
The Ultimate in Cheese Decadence One of our most popular cheeses; this truffle-infused Brillat Savarin can hold its own on a cheeseboard paired simply with a glass of bubbles.  Brillat Savarin aux Truffe is a triple crème cows’...
Details
Brillat Savarin Affine
Rich & Creamy Brillat Savarin Cheese Brillat Savarin is a triple crème cows’ milk cheese made in Burgundy. Triple crème means that cream is added to the whole milk before the cheesemaking process starts. The cheese is shaped...
Details
Confit White Fig
Our White Fig Confit, hand made in the French Pyrenees, is made with sweet white figs, juicy raisins and a touch of bay leaf. It is the perfect accompaniment to a creamy goats cheese such as Ragstone.
Details