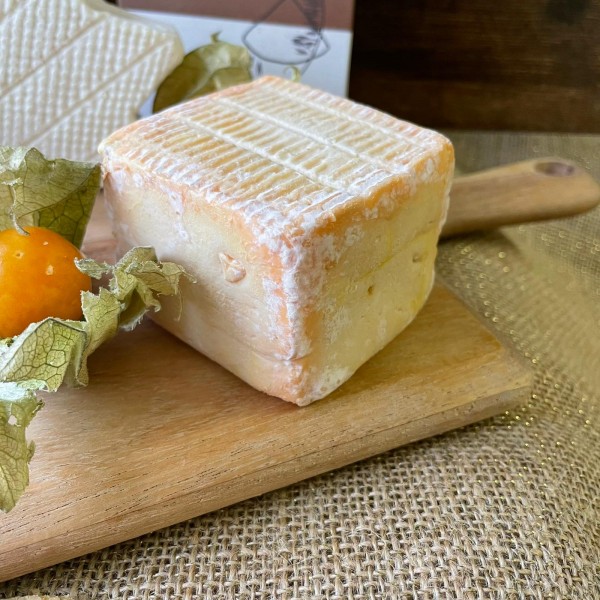 A delicious washed rind cheese from Belgian, the only Belgian AOP-cheese.

‘This punchy washed rind cheese is Belgium’s only protected cheese, first receiving its PDO in 1996. Produced with raw milk from the appellation area in the province of Liege. With a dense yet creamy texture and a satisfying pungency - perfect if you like your cheeses full of flavour and funk.

Produced by Madeleine Hanssen-Polinard and her husband Philippe at the award winning dairy ‘Vieux Moulin’, she is the third generation of cheese makers in her family having taken over the business in 1987. They are passionate about preserving tradition and the authenticity of the cheese.

Like many artisan cheeses, there has been a significant decline in production over the last century. Of the 500 farmers who made Herve in the 1950s, only two remain today, with Vieux Moulin being the only raw milk producer.

The recipe for the cheese dates back more than 8 centuries. However it wasn’t until the 16th century, whenEmperor Charles V banned the export of wheat crops from the region, did the cheese really become synonymous with the region. Unable to make a living, many farmers transformed their agricultural land into pastures for dairy farming. With a surplus of milk, many turned to cheesemaking with the cheese gaining popularity further afield as merchants would travel through the Ardennes forest towards Alsace, Lorraine and even Burgundy with cartfuls of cheese.

So important is the cheese to region, that in some cases it was used as currency. Particularly during the 17th century, where there is even evidence of houses being sold against a payment of Herve cheese.