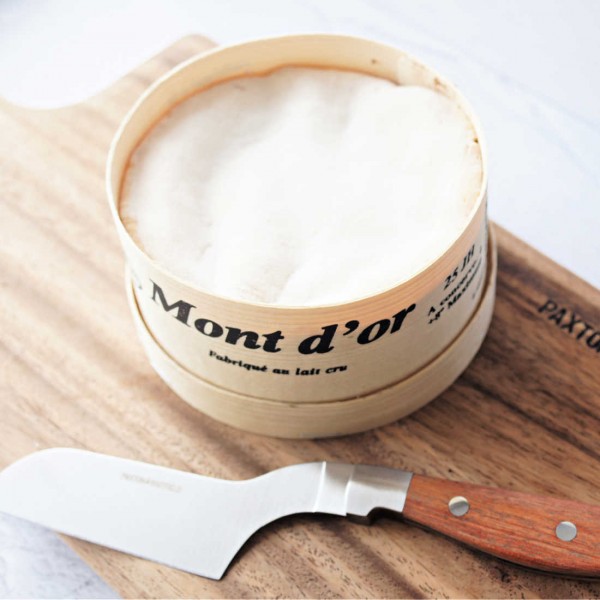 Made in cloth lined moulds and encircled by spruce bark which imparts a resinous flavour. Soft and full flavoured.

The 2020 season of Mont d'Or has arrived! We don't tend to sell the youngest of the Mont d'Or... we wait until the cheese is more mature and until the cheese has passed the taste tests of our Cheese Buyer and Quality Manager. This batch is deliciously milky, with notes of spruce and a rich, unctuous texture. When brought to room temperature, it's spoonable and delightfully oozy.

Approximately 7 litres of milk are needed to make one kilogram of Mont d'Or. The curds are made using traditional rennet and then pressed into cylindrical moulds. Once removed from these moulds, the cheese is encircled with a band of spruce which is slightly smaller than the circumference of the cheese to give the rind a bumpy, crinkled appearance reminiscent of its mountainous region of production. Mont d'Or originated in the winter months when cows returned from the high pastures and their milk yields reduced causing farmers the need to make a smaller cheese. Mont d'Or is governed by a strict PDO and can only be made between the 15th August and the 15th March at an altitude of 700 metres.

Mont d'Or has a Protected Designation of Origin (PDO) and is therefore subject to a number of regulations that prevent inauthentic imitations. These include the fact that it can only be made using the raw milk of Montbeliarde or French Simmental cows that are fed on grass or hay, with the distribution of fermented fodder being forbidden.

Approximately 7 litres of milk are needed to make one kilogram of Mont d'Or. The curds are made using traditional rennet and then pressed into cylindrical moulds.

Once removed from these moulds, the cheese is encircled with a band of spruce which is slightly smaller than the circumference of the cheese to give the rind a bumpy, crinkled appearance reminiscent of its mountainous region of production.

The seasonality of the Mont d'Or, its woody taste and aromas of resin make this a gourmet cheese. Its fragrance is dominated by the aroma from the spruce band, but with hints of mushroom, and its taste is mild and richly creamy.

The texture of Mont d'Or is soft to the point that it can be eaten with a spoon. It can therefore be enjoyed simply with fresh bread, or alternatively it can be baked gently in an oven and mixed with a small amount of white wine to create a simple fondue.

The first written evidence of the existence of Mont d'Or dates back to the 18th century when the cheese appeared at the table of Luis XV who liked it for its flavour and unctuous texture.

The cheese is characterised by fluffy white moulds, turning grey or blue with age. The cheese can pull away from the spruce bark as it ages and can be brown and even black where it has been in contact with the wood.