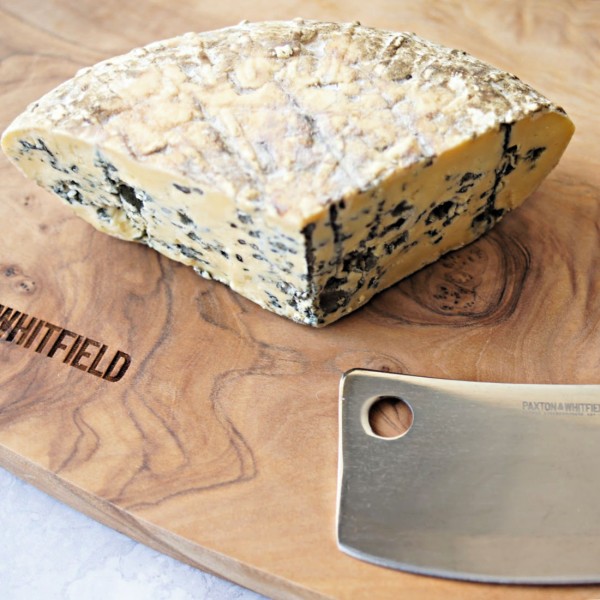 A creamy, slightly open textured cheese with a rustic rind and a yellow, moist interior streaked with blue veins

Barkham Blue is hand made by the artisan cheese makers Sandy and Andy Rose of Two Hoots. Two Hoots are a small family business located in the village of Barkham on the Hampshire/Berkshire border, which make handmade cheeses in the traditional way using the pasteurised milk from Channel Island breeds of cows. They have been making cheese since 2003 and their cheeses have won a succession of awards. They decided to use Jersey and Guernsey cows as Sandy grew up on her mum and dad’s dairy farm in Shurlock Row near Twyford where he milked Jersey and Guernsey cows. This was an unusual decision as their milk is particularly rich and isn’t often used for Blue cheeses as the richness can go sour with blue veining

Barkham Blue is a unique artisan Blue which has a distinctive appearance. The mould ripened cheese is 1kg in weight, ammonite shaped and covered in an attractive, natural, rustic rind and the deep yellow moist interior is spread with dark bluey green veins.

Barkham Blue has a delicious unique flavour due to its rich milk. When mature it becomes very soft and buttery which melts in the mouth and does not leave the harsh metallic taste sometimes associated with blue cheese.

Barkham Blue was also previously awarded Best Blue Cheese, Best English Cheese and Supreme Champion at the British Cheese Awards 2008, and a gold medal at the World Cheese Awards in the same year.

Olive Wood Platter
These attractive hand crafted olive wood cheese boards carry the Paxton & Whitfield brand and each has its own unique styling. They are produced from olive trees that no longer produce fruit and trees are continually being planted to...
Shop Now
Confit Quince & Apple
One of our confit range, this Quince & Apple Confit, hand made in the French Pyrenees, is the perfect fruit accompaniment to blue cheese with its piquant taste.
Shop Now
Monbazillac
This is a delicious dessert wine from vineyards overlooking the Dordogne. An ideal partner for many cheeses especially Roquefort, Fourme D'Ambert and Bleu D'Auvergne or, in fact, any dessert. Only available to customers aged 18 and over.
Shop Now
Featured Item!
Paxton's Cheese Knives Set of Three
A set of three impressive Cheese Knives with stainless steel blades and riveted black polished handles. The set contains a hard and soft cheese knife and a hatchet for use on very hard, aged cheeses. The blades are etched with the...
Shop Now
Cornish Buttermilk Biscuit
Our delicious new Biscuits for Cheese are the ideal accompaniment to a cheese board. They are produced by an artisan bakery in the heart of the West Country, using the finest ingredients to brand new, exclusive recipes, developed with...
Shop Now