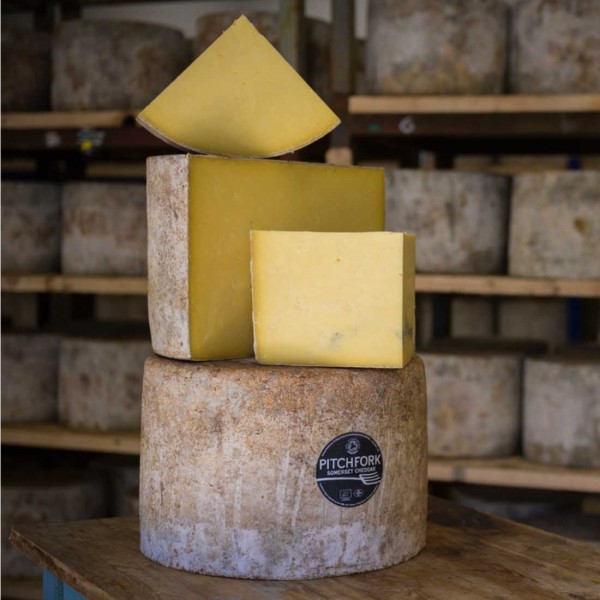 A mature, unpasteurised and organic traditional cloth-bound Cheddar from the makers of Gorwydd Caerphilly

Pitchfork won Best Traditional Cheddar at the 2019 British Cheese Awards in May and has been the talk of the cheese industry. Pitchfork is golden in colour with a mainly smooth, closed texture with the occasional blue vein. It has clean bright flavours, which range from savoury and mustardy to hints of honey with a long finish.

Due to the lengthy maturing process of this new, artisan cheese, we only have a limited quantity available.

Pitchfork Cheddar is made by brothers Todd and Maugan Trethowan, at Trethowan’s Dairy in Somerset. Most well known for their Gorwydd Caerphilly, they have recently and very successfully branched out into Cheddar production, the farm is just 5 miles from the town of Cheddar itself! Having produced Gorwydd for 18 years in Wales, Trethowan’s Dairy relocated in 2014 to a Somerset dairy farm in order to improve the quality of their cheese and work with the best possible milk supply.

They started making Pitchfork in late 2017. It is an unpasteurised, traditional, organic and cloth-bound West Country cheddar. Despite the cheeses relative youth, Trethowan’s and Pitchfork are part of the Slow Food Artisanal Somerset Cheddar Presidium, an honour only 3 other cheddar makers in the world have been awarded with which is a true testament to its quality.

All the milk used to make Pitchfork is completely organic and comes from a pedigree herd of 100 Holsteins and 20 Jerseys cows. The herd’s wellness is of top priority and is keenly managed, to the extent that they are able to dictate the cow’s diets to best suit their cheesemaking requirements. The cows are milked on site and the milk transferred through a set of gravity propelled pipes which transfer it directly into the dairy for cheesemaking. It travels an estimated 20 metres from the cow to the vat!

Cheese Knife Orange
These bright, high quality knives, made by our French Master Cutler, are perfect for everyday use. Only available to customers aged 18 and over.
Shop Now
Paxton's Champagne
This dry and balanced Champagne has been aged in the bottle for at least 3 years. The Pinot Noir grapes account for much of the blend giving great depth and fullness. Only available to customers aged 18 and over.
Shop Now
No 93 Ale Chutney
This chutney shows the best of British products. A truly great handmade fruit chutney married with Paxton and Whitfield's very own English real ale. Packed full of Bramley apples and plums along with a good slug of real ale
Shop Now
Featured Item!
Cheddar - Paxtons Cave Aged
This cheese is made with vegetarian rennet but due to lard being used to adhere the cloth to the rind, it cannot be classed as a vegetarian product. Between the Dorset Downs and the West Dorset Heritage Coast in the Bride Valley,...
Shop Now
Featured Item!
Cheddar - Montgomerys
Montgomery Cheddar is made by Jamie Montgomery in North Cadbury near Yeovil. The Montgomery family are third generation farmers and make one of very few remaining examples of how Cheddar was made in the 19th century. Jamie has indeed...
Shop Now
Poppy & Linseed Cracker
Our delicious Poppy and Linseed crackers are the ideal accompaniment to a cheese board. They are produced by an artisan bakery in the heart of the West Country, using the finest ingredients to brand new, exclusive recipes, developed...
Shop Now