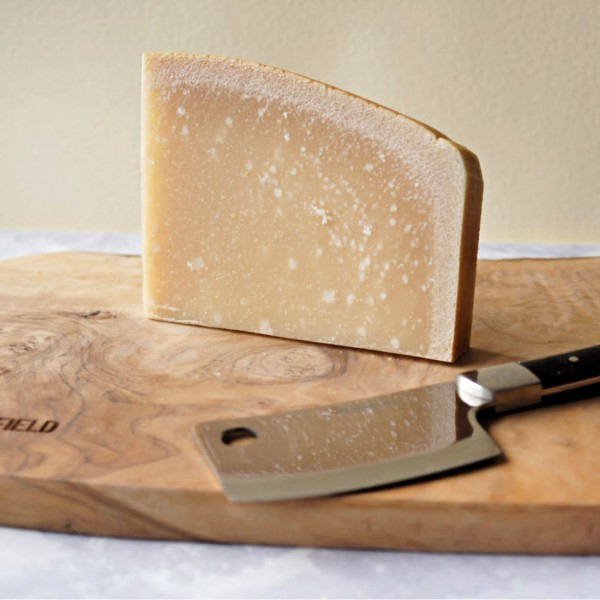 One of Italys most famous cheese, matured for over 24 months. Rich, salty & sweet in flavour.

Known in French and English as Parmesan, although under Italian law officially called Parmigiano Reggiano, this is easily Italy's most famous cheese. It is produced exclusively in Emilia Romagna, in the provinces of Parma, Reggio Emilia, Modena and areas of Mantua and Bologna, all found between the Rivers Po and Reno where the cattle thrive on the lush plains. The cheese has been made for over 2000 years and today over 3 million cheeses are produced every year by some 560 dairies. The specific region of production and maker of any cheese can be determined from a number branded on the rind. If the number is less than 1000, the cheese was made in Reggio Emilia, held by many as the highest quality. If the number comes between 1000 and 3000, the cheese was made in Parma, Modena or Mantua, and over 3000 signifies production in Bologna. Our Parmigiano Reggiano comes from producer 841, and therefore from Reggio Emilia.

A cheese has to be matured for a minimum of 12 months, with a red seal applied to cheeses which have been matured for over 18 months. These have a milky flavour with hints of flowers and herbs which make the product ideal for snacking and aperitifs. After a maturation period of over 22 months, a cheese obtains a silver seal, and will have a stronger aroma and fresh citrus notes with a hint of nuts. Cheeses that have matured for over 30 months have a gold seal and a distinctive flavour with a dryer, more crumbly texture. Our Parmigianno Reggiano is kept for a minimum of 24 months. This allows for the cheese to develop its complexity, with rich, nutty dried fruit flavours, but without being as crystalline and granular as some of the older cheeses.

If a cheese does not meet its PDO requirements for any reason, all identifying marks and the dotted inscription acround the circumference of the cheese are removed.

Confit Pear & Vanilla
This confit is hand made in the Pyrenees and uses the traditional flavour of pear with a hint of vanilla. It tastes great with any hard crumbly cheese such as Lancashire and Cheshire.
Shop Now
Fig Ball
Delicious figs from Southern Italy, that have been slowly baked and wrapped in their own leaves. A perfect accompaniment to any cheeseboard or cold meat selection.
Shop Now
Ale No 93
A superb ale of great character. Golden colour with a spicy hop character, soft fruitiness and some strength. A great partner to cheese. Only available to customers aged 18 and over. Our No.93 Ale is brewed by ex-Brakspear head brewer...
Shop Now