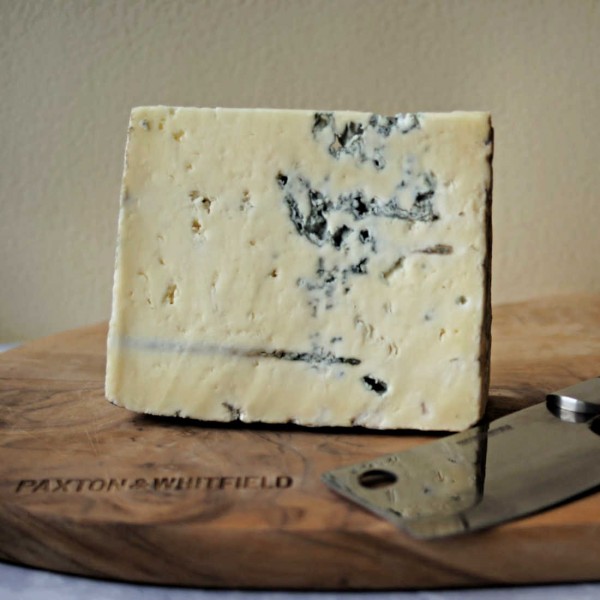 An unpasteurised Scottish Ewes Blue cheese with a sharp and clean flavour . A Scottish equivalent to French Roquefort.

An unpasteurised Scottish Ewe’s Blue cheese with a sharp and clean flavour, the Scottish equivalent to French Roquefort, made by Errington Cheese in South Lanarkshire at the foot of the Pentland Hills in the Southern Uplands of Scotland. They are a small, family-run farm and cheese company started by Humphrey Errington in the early 1980's. The Family originally moved from Dumfriesshire to Lanarkshire in 1981, running as a mixed farming enterprise of beef cattle and sheep. Humphrey Errington started looking at ways of diversifying and became interested in sheep milking and ewes milk cheese because of the ancient tradition of this activity in the Upper Clyde area, and because it offered the chance to add value to a farm product and be free of dependence on government subsidies. Cheese making began in 1983 on a small scale and now the farming enterprise is geared to the need for ewes' milk in order to keep up with the growing demand for the cheese.

Their farm is home to their own flock of 450-500 dairy sheep, predominantly Lacaune with some Friesan. They are kept in during the winter and are then put out in the summer once the silage has been cut. The farm is just under 300 acres of mixed grazing and arable land on which they try to grow as much as possible themselves, making around 60 acres of barley and 100 acres of silage and hay. Due to the altitude and climate the growing season is fairly short compared with some other areas of the UK though so they concentrate on growing high quality silage and hay to provide the basis of the ewes' diet. In 2012 they installed two 20KW wind turbines to take advantage of the fact that the farm lies in the windiest corner of the windiest country in Europe and to minimise their carbon footprint.

The cheese is completely handmade on the farm, the milk is pumped across from the parlour each morning to the vats less than 20 metres away and the cheese matures in a cool and moist traditional stone buildings giving it its unique flavour.

The cheese is matured for six weeks (early season) and for up to 8 months for Christmas time / Burns night. The sheep are onlu milked from January to September so seasonal variations in the cheese will be found. Spring cheese will be fresh and sweet with the blue veins providing a light blue flavour while cheese for Christmas/ Burns night will be more powerful becoming more pungent (described as a kilt-lifter by the cheesemaker!).

The texture is soft and yielding with blue mold throughout. The pure blue flavour given by the smooth Ewe's milk is excellent with very sweet accompaniments such at Paxton & Whitfield’s Monbazillac or Acacia Honey.

Monbazillac
This is a delicious dessert wine from vineyards overlooking the Dordogne. An ideal partner for many cheeses especially Roquefort, Fourme D'Ambert and Bleu D'Auvergne or, in fact, any dessert. Only available to customers aged 18 and over.
Shop Now
Featured Item!
Paxton's Cheese Sharing Board
This large acacia wood cheese board is has two handles; making it perfect for sharing and passing round the dinner table. The board features bevelled edges, a beautiful tactile finish, and is branded with the Paxton & Whitfield logo....
Shop Now
Featured Item!
Paxton's Cheese Knives Set of Three
A set of three impressive Cheese Knives with stainless steel blades and riveted black polished handles. The set contains a hard and soft cheese knife and a hatchet for use on very hard, aged cheeses. The blades are etched with the...
Shop Now
Oaties Celery & Salt
Part of our biscuits and cracker range, Celery and crunchy Sea Salt create a delicious contrast to the nutty taste of these Oaties. Handmade with locally sourced rolled oats from County Armagh. The palm oil used in our Oaties is from...
Shop Now