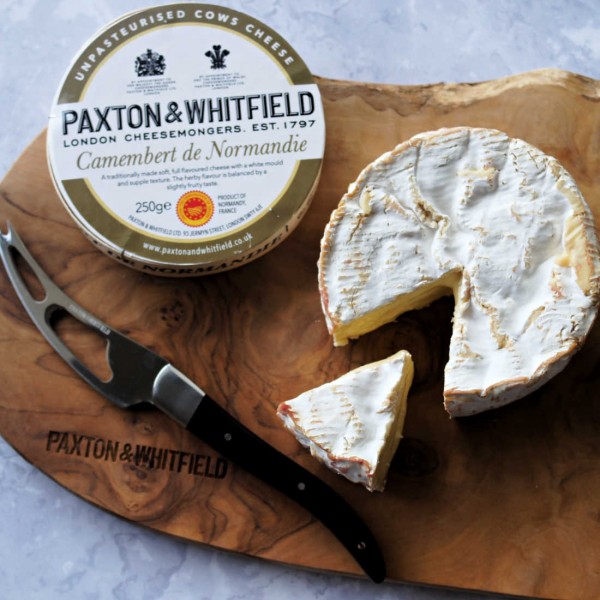 A great example of one of France’s iconic cheeses. Fruity yet earthy flavour with a supple texture

Camembert was created in 1791 in Normandy. Some sources claim it was invented by Marie Harel who was a farming woman in Camembert, Orne, who helped a fugitive priest who was escaping the "Terror". In return for refuge, he taught her to make cheese that could form a white rind. Thereafter it was regularly sold at the nearby market of Vimoutiers. The cheese only achieved national acclaim when it was presented to Naploean III during the World Fair of 1855, and international success in 1888 after the engineer Ridel created its famous cylindrical wooden box which meant it was able to travel without a problem.

The fame of Camembert kept growing with its success encouraging numerous imitations, the majority being of poorer quality. To remedy this, in December 1986, the Assemblee Generale Constitutive du Syndicat des Fabricants du Veritable Camembert de Normandie awarded Camembert de Normandie the valued Appellation Controlee status. This protects only the artisan, unpasteurised cheeses and so it is important when buying a Camembert to look for the words 'de Normandy' and the logo signifying its protected status.

Camembert de Normandu is made generally to a 15 day process. Milk is collected and renneted on the morning of the first day and the curds start to form under warm, damp conditions. The moulding of the Camembert is carried out according to a traditional method whereby five ladlefuls of curds are added to each mould and placed on a wicker mat. They are then 'beaten', a process designed to stop the coagulated milk from sticking to the sides of the mould and to level out the Camembert's surface. The curds then start their slow draining process and the cheeses are manually checked, drained and turned by a completely unmechanised process. The following day, the cheeses are salted to accentuate the full flavour and to encourage the ambient micro-organisms needed to mature the Camembert. They are then matured for about twelve days in a humid cellar, where the cheeses give off a mild apple smell. Their white rind grows slowly and the cheeses are regularly turned and checked for temperature and moisture levels. On the 14th day, the cheeses are carefully selected and packed into their distinctive wooden boxes to preserve their taste and flavour. others are chosen to mature on in the cellars for a further 20 days or so.

A great Camembert should have a rippled rind with a good coating of white downy mould and some reddish pigmentation. The interior should be supple thorughout with a creamy, white colour and a smell reminiscent of the earth and cellars. The taste fills the mouth with an intense, fruity flavour.

Paxton & Whitfield's Camembert de Normandie PDO is made on the Cotentin coast halfway bewteen the sea and the rich meadows of Normandy.