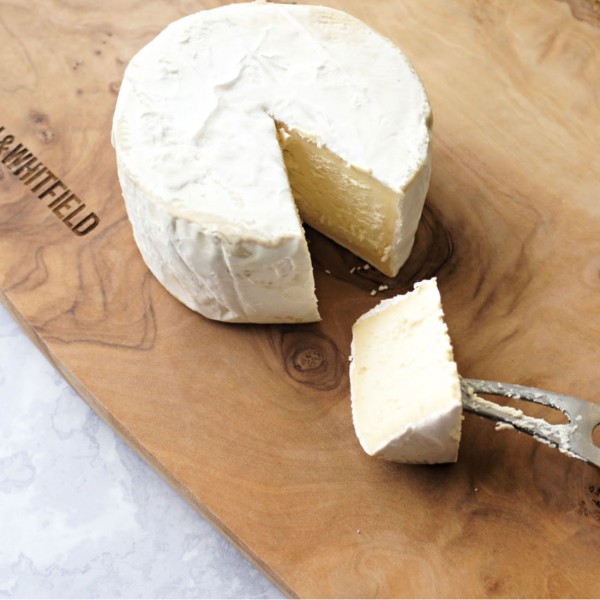 Soft, double cream texture. Lactic and creamy when young with walnut and mushroom flavours as it matures.

£7.75 per unit
Not for export Unpasteurised Traditional Rennet Cow

Finn is a soft cheese, but not runny in the way associated with Brie or Camembert. It would be better described as firm but soft with a sweet, slightly nutty and mushroomy flavour and a distinctly salty tang. Like the French double cream cheese, 10% additional cream is added to the milk before cheesemaking starts.

Made by Charlie Westhead from Neal's Yard Creamery which moved from The South East in1996 to the beautiful location on Dorstone Hill, overlooking the River Wye in Herefordshire.Their small-scale approach to cheese making means that they retain control not only of the production, but also of their power and heating needs. This is not something they undertake as a publicity exercise - it is at the core of everything they do, both at home and in business. The electricity is sourced from ethical suppliers, and as much as possible is generated on-site by a windmill. Heating requirements are amply handled with a customised furnace, burning locally sourced wood. The organic milk used to make Finn is collected in the mornings from Andrew and Rachel Giles' farm at Glasbury-on-Wye. The cows are New Zealand Friesian (very similar to the British Friesian) with some Jerseys.

Paxtons Champagne
This dry and balanced Champagne has been aged in the bottle for at least 3 years. The Pinot Noir grapes account for much of the blend giving great depth and fullness. Only available to customers aged 18 and over.
Shop Now
Tunworth
Tunworth is a handmade pasteurised cheese. It has a delicate, thick rind with a rich, creamy yellow interior that gently oozes but doesn't run away. Whilst there is a slight bite to the rind, the centre melts in the mouth and the two...
Shop Now
Olive Wood Platter
These attractive hand crafted olive wood cheese boards carry the Paxton & Whitfield brand and each has its own unique styling. They are produced from olive trees that no longer produce fruit and trees are continually being planted to...
Shop Now
Apricot, Date & Sunflower Seed Cracker Bakes
Deliciously crunchy, twice-baked gourmet sodabread crackers with apricots, dates and sunflower seeds. Perfect as a snack or when paired with blue cheeses. Our Cracker Bakes are made to exclusive recipes in a family-run bakery in the...
Shop Now
Featured Item!
Paxtons Cheese Knives Set of Three
A set of three impressive Cheese Knives with stainless steel blades and riveted black polished handles. The set contains a hard and soft cheese knife and a hatchet for use on very hard, aged cheeses. The blades are etched with the...
Shop Now
Make Your Own British Cheese Board
New for 2019! Creative cheese platters to wow your guests and so simple to create. We'll send you all the cheeses and accompaniments pictured, as well as a detailed instruction card explaining how to cut the cheeses and assemble the...
Shop Now