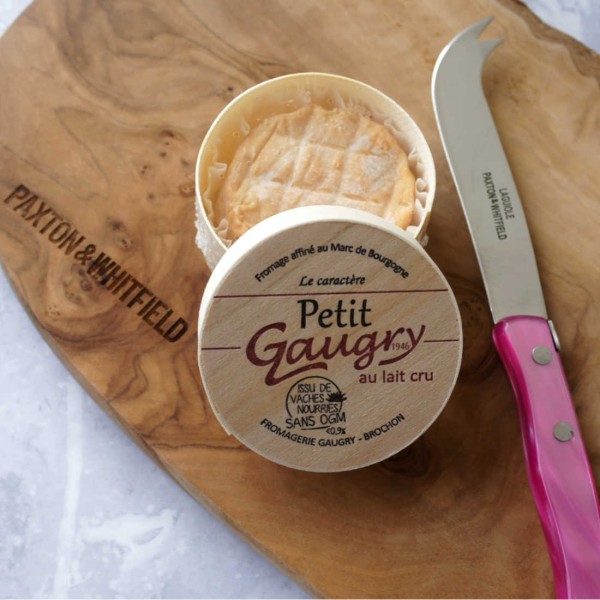 A miniature cheese from the Fromagerie Gaugry , akin to an Epoisses, that has been washed in Marc de Bourgogne.

£6.25 per unit
Not for export Unpasteurised Traditional Rennet Cow

Petit Gaugry is in essence a miniature version of Fromagerie Gaugry’s Epoisses. Epoisses was invented at the beginning of the 16th century by Cistercian monks and is named after the town where it was first produced. It was imported to the court of the Count of Guitaut, one of Louis XIV's noblemen where it became very fashionable, and was also one of the favourite cheeses of Napolean who adored the wine of Chambertin which marries perfectly with it.

Epoisses was still very popular in the 20th century but its production petered out during the second World War until Monsieur Berthaut from the village of Epoisses began producing it again. On its revival in 1956, Epoisses began to grow again in popularity, and thanks to the cheese makers it succeeded in gaining official recognition in 1991 with the Appellation d'Origine Controlee, now the Protected Designation of Origin (PDO).

The Gaugry Family have been making cheese in Brochon, Bourgogne for four generations. The same techniques and processes that are used to make Epoisses are also used to make Petit Gaugry.

Today, three breeds of cow are used for the production of milk for the Epoisses cheese: the Brune, principally in the Chatillonnais, the French Simmental on the plateau of Langres and in the sunken valleys of the north of Auxois, and the Montbeliarde in the south of Auxois, next to Dijon. The whole, unpasteurised milk from the evening's milking is mixed with fresh, warm morning milk and rennet is added. Traditionally, the rennet is flavoured with herbs, and the initial ripening of the cheese takes place on rye straw. However, this is more recently done on plastic mats, after the milling and salting, and the soft cheese is moistened with marc de Bourgogne, the local spirit made with grape must or wine lees. It is then cured in humid cellars where it is soaked again in marc or a marc and brine solution.

The rind of the Petit Gaugry is smooth, slightly wrinkled and glossy and is orange to brick red in colour depending on how long it has been matured. The interior of the cheese is white in the centre and slightly darker towards the rind and has a strong, earthy aroma. In the mouth, the cheese is smooth, unctuous and velvety and has a mild, subtle flavour with undertones of dried fruit.