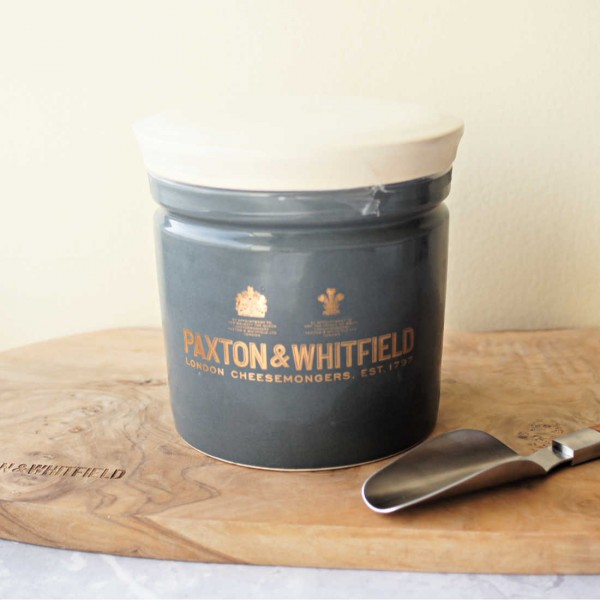 Our iconic Stilton jars are a perfect gift for cheese lovers. Our award-winning Stilton is crumbled into these collectable jars, and covered with a wax seal to ensure the quality of the product. When crumbled into a jar, the texture of the cheese is softer and creamier than you would expect from piece of Stilton cut from a whole cheese.

Such was the popularity of Stilton that others in the area started to produce cheeses similar in style and in1910, the producers had the foresight to lay down methods of production to protect where the cheese could be made and its nature. The controls still exist today in the form of a Protected Designation of Origin (PDO). Amongst other things, this PDO specifies that the cheese has to be made with pasteurised milk within the counties of Nottinghamshire, Leicestershire and Derbyshire. Paxton & Whitfield Stilton is made by Cropwell Bishop in Nottinghamshire and comprises cheeses that have been graded and chosen to meet the flavour and texture profiles that we have put in place.

Cornish Buttermilk Biscuit
Our delicious new Biscuits for Cheese are the ideal accompaniment to a cheese board. They are produced by an artisan bakery in the heart of the West Country, using the finest ingredients to brand new, exclusive recipes, developed with...
Shop Now
Paxtons Stilton Scoop
A stylish stainless steel Stilton Scoop with a riveted rosewood handle, ideal for serving stilton from a jar or a wheel of cheese. Paxton & Whitfield’s Stilton Scoop is constructed with a triple riveted handle and a 314 stainless...
Shop Now
Paxtons Vintage Port
This vintage Port has a good depth of flavour and substantial structure. It can be enjoyed for the next10 years and it is recommended that it is decanted before serving. Only available to customers aged 18 and over.
Shop Now
Paxtons Tawny Port
This Tawny Port has been bottled for immediate drinking and does not need decanting. The flavour is mellow and elegant and combines delicate wood notes with rich aromas of mature fruit. Only available to customers aged 18 and over.
Shop Now
Oaties Walnut
Part of our cracker and biscuit range, these Walnut Oaties are handmade with locally sourced rolled oats from County Armagh. They are crammed with walnuts for a rich, nutty taste and texture. The palm oil used in our Oaties is from a...
Shop Now