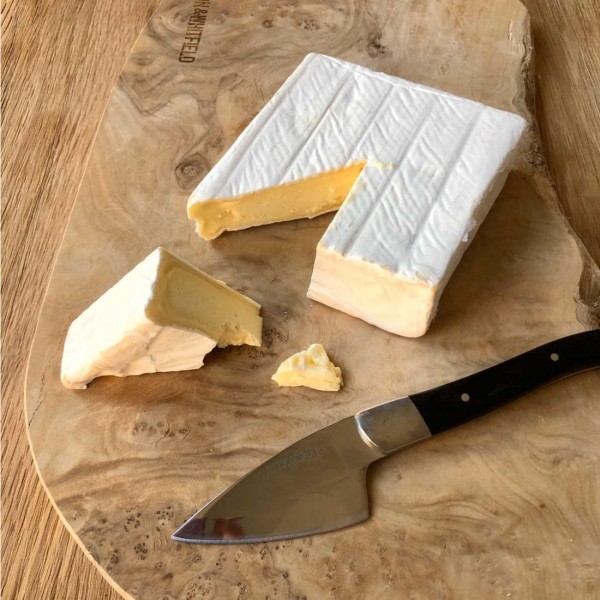 Made near the River Avon from the milk of cows that graze the lush meadows, giving a soft and delicious cheese.

At Park Farm, the Padfield family have been milking their herd of cows for three generations. A few years ago they thought they would try making cheese and so production started in the same buildings in which the current generation's grandmother made her cheddar. The small herd of Holstein Friesian cows are just a few hundred yards away.

Park Farm is uses entirely organic process and are registered with the Organic Farmers and Grower. They take a very traditional approach to how they raise and graze their cows which continues into the making of their artisan cheese which are all handmade.

Bath Soft is a square cheese which is soft and yielding with a white bloomy rind. The cheese has a gently and creamy flavour with mushroom and citrus undertones. Bath soft cheese is beautifully wrapped in parchment paper with a red wax seal a design which won best packaging at the 2015 British Cheese Awards.

Bath soft has a rich and interesting history and reportedly was sent to Admiral Lord Nelson in 1801 by his father as a gift. It was noted that Lord Nelson’s sweet heart was ‘gratified’ by the favour of the cheese.

Cote De Duras Sauvignon Blanc Full Bottle
Cote de Duras White Wine Perfectly Paired with Cheese A vibrant white wine with plenty of exotic fruit aromas and a soft round palate that finishes with a lovely zingy freshness. Drink on its own as an aperitif or with cheese. Only...
Details
English Cheese Feast
A delicious, artisanal English cheese course with larger cuts of cheese to serve 14-18 people - or serve fewer people with plenty of leftovers to keep & enjoy. This English Cheese Feast selection contains: Westcombe Cheddar...
Details
Tunworth
A must-have on any British Cheeseboard  Tunworth is one of the best British soft cheeses in production and has won dozens of awards to prove it, twice winning Supreme Champion at the British Cheese Awards. Its rind is bloomy and...
Details
White Truffle Honey
The base of this White Truffle Honey is organic Acacia honey, made by bees that forage on the nectar of the Robinia pseudoacacia tree. Acacia honey is much slower to crystallise than other varieties of honey; with a luxuriously smooth...
Details