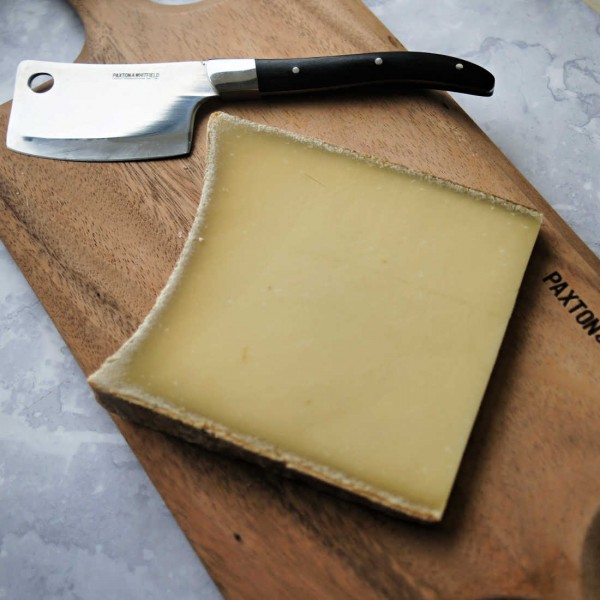 Beaufort is a huge Alpine cheese weighing between 40-60kg whose recipe is widely believed to have been imported from the Romans. It is named after the Beaufort Valley where it was first produced, where mountains reach altitudes of 3000 metres.

Beaufort cheese is pale yellow, with a smooth and creamy texture and lacks holes like other Gruyère-style cheeses. Beaufort also has a very distinct aroma, sometime described as strong or mildly pungent and reminiscent of the pastures on which the Tarentaise and Abondance cows graze to provide the milk used for the cheese.

Beaufort is commonly used to make cheese fondue because it melts easily. Beaufort is one of the many cheeses that go well with white wine,

Beaufort has been a protected cheese since 1968, ensuring certain standards of production, and relies on transhumance, the seasonal movement of the cows from lower plains to the higher mountain pastures. If complying with certain regulations, it can be classed as Beaufort d'Ete which uses purely summer milk from high mountain pastures, or Beaufort Chalet d'Alpage, which uses the summertime milk produced from a single herd of cows from a chalet found in mountain pasture over an altitude of 1500m.

Beaufort is made exclusively from raw milk and around 12 litres of it are required to produce just one kg of cheese. The milk is heated to 33 degrees to be curdled by the addition of rennet, and the curds are then cut into small pieces so that a large quantity of water can be drained. The rest of the whey is drained by a traditional method known as the 'brassage sur le feu" or the 'mixing over the fire' whereby the small pieces of curd are heated to a higher temperature and constantly stirred. The curds are then placed in a linen cloth surrounded by a band of wood which gives the Beaufort its characteristic concave heel. This is then pressed for 20 hours during which time it is regularly turned. The cheese gets its first salting after 24 hours when it is plunged into a brine bath, and then it is matured in humid caves for another five months at least, during which time it is salted, scraped and turned twice a week.