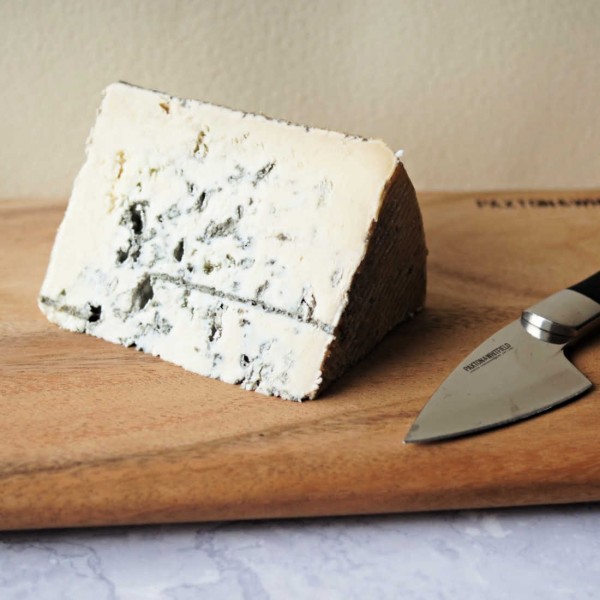 A creamy mild blue cheese with the distinctive sweetness of sheeps milk. It matures to a piquant, full blue flavour

Crozier Blue has a smooth, creamy, yet firm, texture and a distinctive, not overpowering, blue cheese flavour, with a pleasant saltiness and slight nutty notes.

Crozier Blue has been developed as a joint venture between Louis and Jane Grubb of Cashel Blue, and the Clifton Brown family, who run the nearby Ballinamona Farm. The name Crozier Blue is a play on the word Crozier, meaning the hooked staff either carried by a shepherd, or carried as a symbol of authority by a bishop. It is believed that Crozier of St Patrick can be seen at the Rock of Cashel, a spectacular and famous tourist attraction in Co. Tipperary.

The milk for the cheese comes from the Ballinamona flock of approximately 300 Friesland ewes. The milk is transported to the Cashel dairy several times a week where the Cashel team, led by head cheesemaker, Geurt van den Dikkenberg, use it to make a sheep's milk blue cheese that basically follows the Cashel Blue recipe. The dairy uses mainly traditional cheesemaking methods, all the vat work being done by hand, however, mechanisation has been introduced where it is felt it is not detrimental to the quality of the cheese, and a turning machine is used to turn 400 cheeses at a time.

The cheese has won many awards and medals, including Gold at both the World and British Cheese Awards over the years, as well as the Guaranteed Irish Food Writers Guild Award in 2005 - the highest accolade a food product can achieve in Ireland, awarded to a product with at least 3 years commercial production in recognition of Consistency, Excellence and Quality.

Crozier Blue won gold and best in class at the Irish Cheese Awards 2017 in the Blue Cheese category.

Our Monbazillac is a perfect match for Crozier Blue.