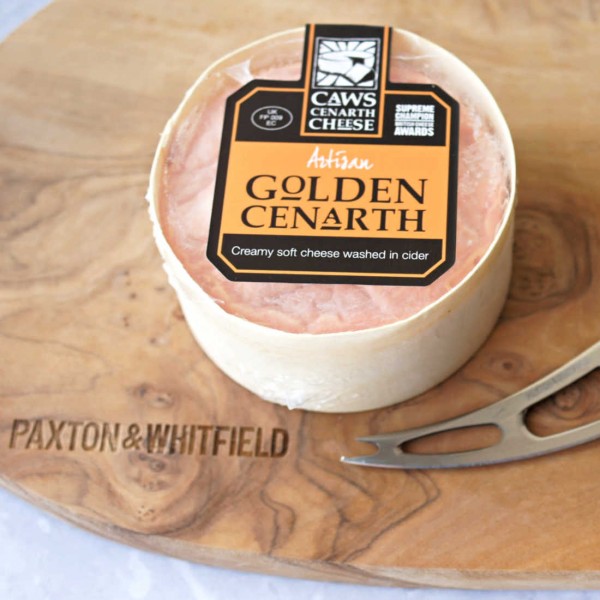 A rind washed soft cheese made in West Wales from cows milk, with a springy, supple texture and buttery flavour.

Golden Cenarth is a washed rind soft cheese with a springy, supple texture and buttery flavour. The rind is slightly orange-tinted from the brine wash it is given early in maturation and the flesh is slightly elastic in texture when young and matures to be soft and unctuous with a rich flavour of churned cream.

Golden Cenarth is made by Carwyn Adams of Caws Cenarth. This is a family cheesemakers in West Wales started by Carwyn's parents Thelma and Gwynfor in1987. Thelma and Gwynfor were greatly affected by the introduction of milk quotas in 1987 which had an effect on the price of milk. Thelma and Gweynfor decided the best option was not to have to close their dairy all together but to diversify into cheese making which has been a huge success ever since and they have not looked back once.

Although the family has been making Caerffili for many years, Carwyn is an experimenter and as a result Golden Cenarth was found by accident from an aged piece of Caerffili. The Caerffili which was a week out of date had started getting a red tinge to the rind and was breaking down and becoming softer. The Adams' were very impressed and surprised by the good flavour from the out of date Caerffili, that they tried to make it again and thus resulting in the delicious Golden Cenarth.

The milk used is GM-free and all sourced from local farms. The cheese comes in a 200g wheel, presented in a round wooden box.

Cheddar - Paxtons Cave Aged
Award Winning Cave Aged Cheddar Between the Dorset Downs and the West Dorset Heritage Coast in the Bride Valley, Paxton & Whitfield's Cave Aged Cheddar is handmade to a traditional recipe using milk from local herds to give a...
Details
Rachel
Semi-hard British Goats' Cheese Rachel has a warm reddish orange colour on the crust with a pale, supple interior and a flavour that is not overly 'goaty' but nutty and mellow.  It is perfect for those who like a full flavoured...
Details
Fosseway Fleece
Firm British Ewe's Milk Cheese The texture of Fosseway Fleece is remarkably smooth and creamy. The flavour has a fresh and clean taste that ends in a nutty, mellow tang. Fosseway Fleece takes its name from the old Roman ‘Fosse Way...
Details
Tor
This pyramidal goat's cheese takes its name from the famous Glastonbury Tor which is only a stone's throw away from where the cheese, Tor, is produced. The flavour is fresher and cleaner than the similar classic French cheeses such as...
Details
Wigmore
Named after the cheese-makers, Wigmore is a traditional, hand-made, washed curd cheese - a method of cheese-making used widely across Europe. It is made using thermised ewe's milk and is matured for six weeks.Wigmore has something of...
Details