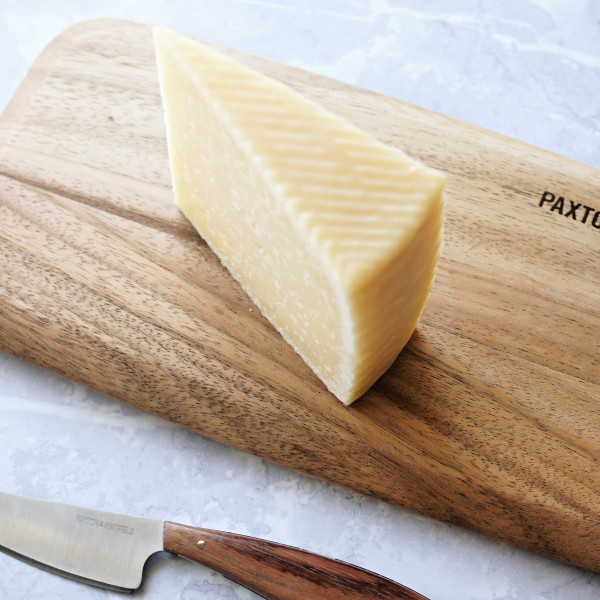 Our artisan Manchego is aged for a minimum of 6 months and made from 100% unpasteurised Manchega sheep’s milk. The paste has a slight graininess and characteristic manchego ‘pinhole’ appearance. The flavour begins sweet and grassy and develops into a complex nuttiness which lingers on the palate.

We source our Manchego from Gómez Moreno Cheeses who have been making cheese on the La Mancha plain since the 19th Century and was started by a family of shepherds. Head cheesemaker Jose Miguel uses a 100 year old recipe and only the unpasteurised milk of the indigenous Manchega sheep to produce this ‘Carpuela’ range of manchegos. ‘Carpuela’ refers to Bernardo Carpuela a local, legendary cheesemaker of the 19th Century.

This cured "Vintage" cheese is aged for 8 months and won the best cheese in Spain 2016.

An 8 month old profile of this cheese won best cheese in Spain in 2016.

Cote De Duras Red Wine
Youthful fruit characterises this wine from Cotes de Duras, but it is balanced by depth of flavour making it an excellent wine for all occasions. Merlot predominates. Only available to customers aged 18 and over. The Cote De Duras is...
Details
Cheddar - Paxtons Cave Aged
Award Winning Cave Aged Cheddar Between the Dorset Downs and the West Dorset Heritage Coast in the Bride Valley, Paxton & Whitfield's Cave Aged Cheddar is handmade to a traditional recipe using milk from local herds to give a...
Details
Biscuits for Cheese
Our delicious Biscuits for Cheese are the ideal accompaniment to a cheese board and contains plenty for 6-8 people. These biscuits are produced by an artisan bakery in the heart of the West Country, using the finest ingredients to...
Details
Spiced Plum Chutney
Warming Spiced Plum Chutney Our spiced plum chutney is hand-prepared with plums sourced from the Lake District and is flavoured with a selection of warm spices. The plums are cooked low and slow with onions, English apples and...
Details
Comté Androuet
Comte is made in the Jura Mountains on the French side of the Swiss / French border. It is from the Gruyere family and is fairly similar to Gruyere itself, although lighter in character with more complexity and finesse. It is made using...
Details