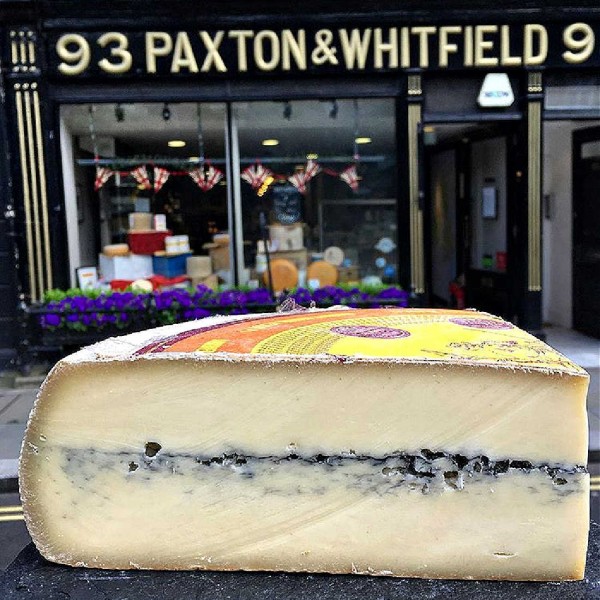 Morbier cheese has a wonderful toothsome and lightly pliable texture - great if you are a fan of Edam or leerdammer. The flavour is comfortingly milky and creamy, yet it is in no way a mild cheese. With a distinctive line of ash down the middle, it's an attractive cheese for your November cheeseboard.

Morbier takes its name from the origin and centre of its production, the village of Morbier in the department of Jura in the Franche-Comté  province. It is first recorded as existing as a cheese in a letter dated 1795 from the Mayor of Morbier, and came about as a use for curd left-overs which the producers of the cheese Comté used to reserve for their own consumption. The makers would make the bottom half of the cheese and then scatter ash from the fire over the curds to protect them over night. They would then top up the other half of the cheese with the next morning's make. Today the cheese is made specially, rather than as an afterthought, and the line of ash (now vegetable ash) is a lovely nod to the tradition. Morbier is still matured in the district of origin, in the Franche-Comté cellars.

Try Morbier on your November cheese board. Please Note: This artisan cheese is exclusively available for November delivery dates. If you would like to select December dates for your cheese order to be delivered, please don't add Morbier to your cart.

Comté Vieux
We have sourced this very special Comté Vieux from our affineur in France . Aged for approximately 29 months in French caves; the flavour is nutty, full and rich, with fruity tones and more of the crunchy Tyrosine crystals formed...
Details
Paxton's Champagne
Champagne to enjoy with artisan cheese Our Grand Cru Champagne is specially selected for pairing with cheese – made by Paul Bara; a small, family-run Champagne house in its seventh generation. Paul Bara's 11 hectares are situated...
Details
Comté Androuet
Comte is made in the Jura Mountains on the French side of the Swiss / French border. It is from the Gruyere family and is fairly similar to Gruyere itself, although lighter in character with more complexity and finesse. It is made using...
Details