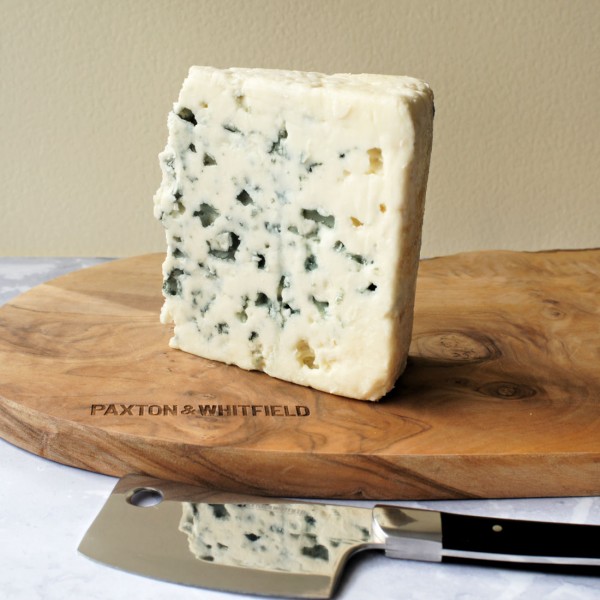 A famous French blue cheese aged in caves at Combalou. This Ewe's milk cheese has a tangy, salty flavour with sweet notes.

Young Roquefort is fairly firm in texture and has a mildly metallic taste evident over the sweet quality of the ewes' milk and bite of the blue veining. With age, the Roquefort takes on a creamier consistency, and the blue veins reach right to the edge of the cheese. The flavour becomes very strong and spicy with an openly sweet and rich flavour coming from the milk.

It is the full character of this cheese which makes it ideal as a cooking ingredient as well as a perfect choice for a cheese board, to be accompanied by a fine Sauternes, Tokaji or our Monbazillac wine.

Roquefort is the most famous of French blue cheeses and is named after the small village of Roquefort which lies between the Auvergne and Languedoc in the Aveyron region of France. A series of earthquakes and landslides in the Combalou plateau millions of years ago created the unique site with natural faults called 'Fleurine' which are essential to the development of the cheese as they mature under the village. They ensure that the temperature and humidity remain constant throughout the year because when the temperature oustide the cave is higher, the faults draw air inwards and downwards, and when the temperature rises in the caves, the air is drawn upwards and outwards.

The region's climate is extreme with hot, dry summers and cold winters, which particularly suits the hardy sheep of the Lacaune race. These sheep are milked twice a day and the milk used to make the famous cheese by one of a handful of producers in the area.

In 1925, French law officially protected Roquefort in its geography and methods of production, helping to ensure a consistent character and quality in the cheese. This is now a Protected Designation of Origin (PDO) and denotes that Roquefort be made only with the milk from the Lacaune sheep and matured for at least 3 months in the Cambalou Fleurines. This particular Roquefort has been aged in the caves for 9 months.

The most noteworthy part of the production method for Roquefort is the introduction of the green - blue moulds, the Penicillium Roqueforti. This mould lives in the ground and contains the property which ferments the cheese. In handmade production, rye bread and wheat are stored and after 6 weeks, the mould is collected and introduced into the body of the cheese using a needle. After 4 weeks, the cheeses are rubbed in salt and wrapped in aluminium foil to avoid contamination with other bacteria's, avoid the formation of a hard crust and to ensure the slow and rich development of the unique flavour.

Roquefort can be traced back as far as 57BC when Julius Caesar recorded tasting the delicious cheese in his travels through France. Local folklore puts its creation down to a love-struck shepherd who was distracted by his young love from tending his sheep and abandoned his lunch in the cave in which he was sheltering. He returned a few days later to find that the cheese had developed a green mould that had spread through to its centre.

Monbazillac
Dessert Wine for Cheese The Paxton & Whitfield Monbazillac shows its quality over many others with the underlying vein of fresh, fruity acidity which cuts through the sweetness to stop the wine from being cloying as some can...
Details
Paxtons Cheese Board & Knife Set
A set that includes an acacia wood cheese board and a cheese knife with a stainless steel blade and a rosewood handle – everything you need to serve your cheese! The cheese board features an attractive bevelled edge and a beautiful...
Details
Truly Great - Cheese Gift
Five artisan British cheeses that have been chosen for their consistent quality and taste. Hand-cut and hand-wrapped in Paxton & Whitfield wax paper by our artisan cheesemongers.  Your 'Truly Great' Cheese Collection...
Details
Brillat Savarin Affine
Rich & Creamy Brillat Savarin Cheese Brillat Savarin is a triple crème cows’ milk cheese made in Burgundy. Triple crème means that cream is added to the whole milk before the cheesemaking process starts. The cheese is shaped...
Details