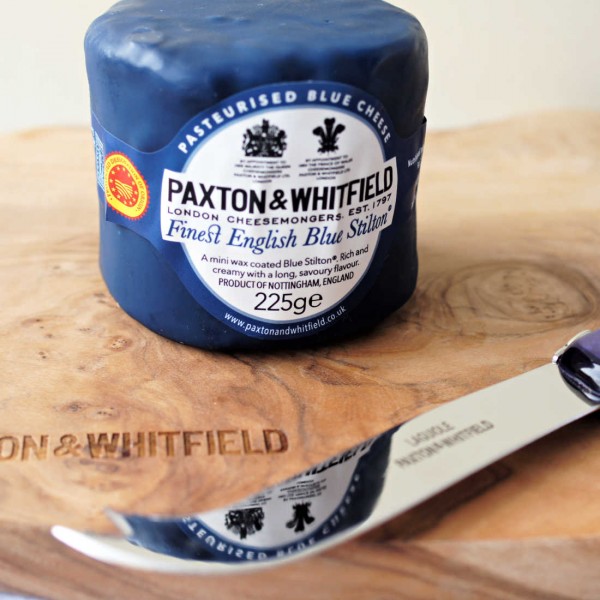 Our miniature cheeses are cut from our specially selected Paxton & Whitfield Stilton, before being wrapped in a film and then coated in wax to maintain the quality of the cheese for longer.

The milk used to make Stilton is a blend of morning and evening milk to which starter culture, rennet and blue mould culture is added. Once curds have formed, the whey is drained and the curds are hand ladled from the vat to the 'table' where they settle over night. The following day, the curds are milled, salted and transferred by hand into cylindrical moulds. After a week when the cheeses have started to develop, they are taken out of the moulds and the rind is smoothed down. They remain in the ripening room for a further 4 weeks before they are pierced with stainless steel needles to encourage air to reach the interior of the cheese to spread the growth of the characteristic blue veining.  Paxton & Whitfield cheese is then matured to approximately twelve weeks before it gets sold from the shops

A young Stilton such as can commonly be found in supermarkets has a crumbly texture and high acidity. It is commonly thought to have a soapy taste. As it matures, however, the texture becomes creamier and the flavour more mellow, with a buttery richness that melts in the mouth. Stilton in prime condition has a grey, wrinkly crust and the inside should be creamy yellow with an even spread of blue-green veins. The strength of the flavour should not be overpowering, but have a pleasant, herby tang.

The Paxton & Whitfield wax Stilton is perfect for your cheese board or deliciously eaten on its own with crackers and Vintage Port.

Farmhouse Butter - Artisan Biscuits for Cheese
Farmhouse Butter - Artisan Biscuits for Cheese These light and buttery biscuits are mellow & buttery - with a satisfying snap to accompany any style of cheese. They are specially hand-made for Paxton & Whitfield by an artisan...
Details
Paxtons Vintage Port
This vintage Port has a good depth of flavour and substantial structure. It can be enjoyed for the next 10 years and it is recommended that it is decanted before serving. Our Vintage Port has big flavours and a rich body which best...
Details
Fig and Walnut Conserve
A rich and sticky Fig paste with Walnuts. To taste it is thick and fruity, but not too sweet, extremely figgy, with the walnuts coming through to balance. Handmade in the French Pyrenees by an artisan producer, this product is exclusive...
Details