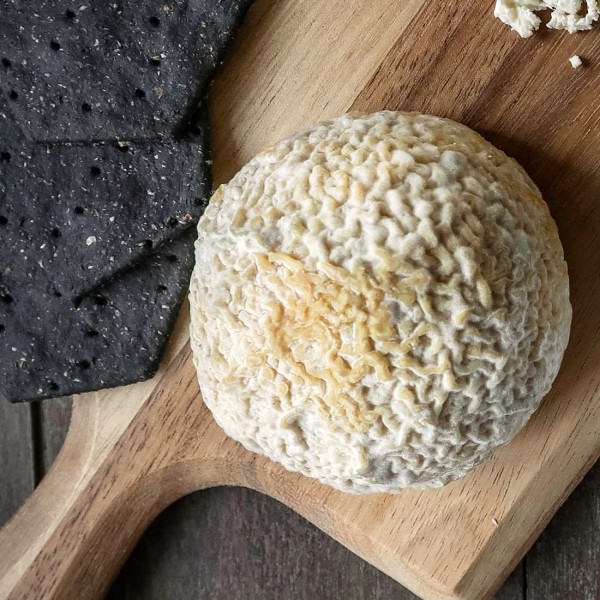 A delicious unpasteurised, truffle goats' milk cheese, with a fluffy texture that is flecked with mouth-watering black truffle.

Granizo Trufado is a delicious raw milk goat’s cheese, with a fluffy texture that is flecked with mouth-watering black truffle.

Each cheese is handcrafted using raw milk from La Mancha goats, a breed known for its high butterfat content milk which has an intense flavour. The cheesemaking process is a little unusual, a couple of days after the curd has been made the black truffle is added and then this little dome is shaped and formed by hand. Known locally as ‘el cerebro’, (Spanish for ‘brain’) the pretty ivory rind has an interesting vermiculated pattern hence its nickname.

Made in Villamalea, Albacete by cheesemaker Jose Luis Abellán of Quesos La Rueda, who started making cheese over 25 years ago. Hailing from a family of farmers, he began in cheese making when he found himself unemployed and applied for a job at a local dairy, turning cheeses, cleaning, packing and quickly began to fall in love with the idea of making cheese with a dream to one day make a living from making cheese. Whilst he has realised this dream, it has not been without struggles as the crises in milk pricing that we have seen in the UK over the years have also been an issue in Spain. The area around Albacete is linked with large scale Manchego production, La Rueda are known as ‘the novelties’ in the local community, dedicating themselves to producing raw milk artisan cheeses, whilst managing and caring for their own herd of goats to create the best milk.

English Sparkling Wine Paxton & Whitfield
English Sparkling Wine for Artisan Cheese We are delighted to be working with the boutique English grower and award-winning producer Fox & Fox Mayfield to bottle, for the first time ever, our very own, English Sparkling...
Details
Cremoso
Delectable, Spoonable Cremoso Cheese There’s an excitable buzz amongst our cheesemongers about adding this new Spanish cheese to our range for 2021. It’s both delicious and a touch of theatre for your cheeseboard - a sweet, milky,...
Details
Truffle Cheese Collection
Decadent Truffle Cheese A home-dining foodie feast! This decadent, truffle cheese collection will serve 4 - 6 people and includes our best-selling Brillat Savarin aux Truffes 200g, Moliterno with Truffles 250g and Granizo Trufado...
Details
Moliterno with Truffles
Beautifully Marbled Truffle Cheese Produced on the island of Sardinia off the coast of Italy, this is an unforgettably dense and fudgy cheese, with the unique appearance of almost zebra stripes of black truffle throughout. A delicious...
Details
Paxtons Cheese Sharing Board
This large acacia wood cheese board is has two handles; making it perfect for sharing and passing round the dinner table. The board features bevelled edges, a beautiful tactile finish, and is branded with the Paxton & Whitfield...
Details
Paxtons Cheese Knives Set of Two
Cheese knives designed for artisan cheese A set of two Cheese Knives with stainless steel blades and riveted rosewood handles. The soft cheese knife has holes in the blade to ease cutting through the stickiest of soft cheeses and...
Details
Paxton's Champagne
Champagne to enjoy with artisan cheese Our Grand Cru Champagne is specially selected for pairing with cheese – made by Paul Bara; a small, family-run Champagne house in its seventh generation. Paul Bara's 11 hectares are situated...
Details