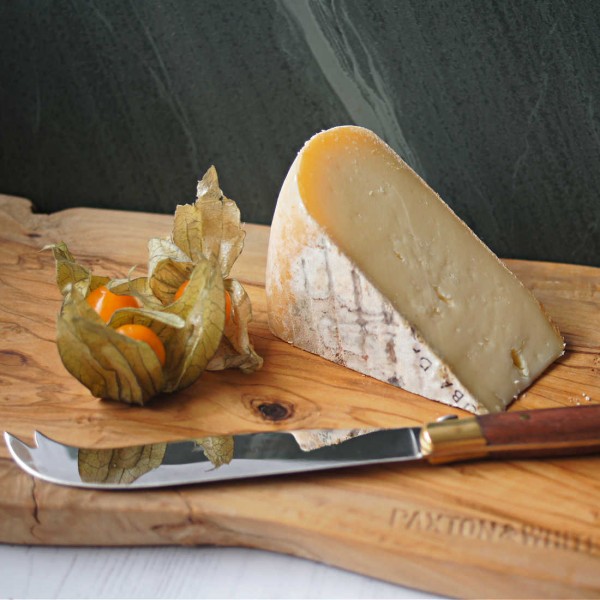 A full flavoured cheese from Menorca with a unique flavour and aroma coming from the paprika and olive oil-rubbed rind.

Taste this Guest Cheese for October

Mahón is a delicious, semi-firm Spanish cheese with a fresh taste, amongst complex flavours and a buttery texture. A delicious cheese to enjoy on an autumnal evening; paired beautifully with a glass of Madeira or Rioja. We have 70 pieces available for your October cheeseboard enjoyment - each will be freshly-cut and wrapped from our Cotswold Cheeserooms.

The peculiar flattened shape of Mahón is due to the fact that it is cloth pressed before being placed in the ageing cellars. This traditional method of production requires cheese to be periodically rubbed with olive oil and paprika, which gives the rind its typical orange colour.

Our Mahón is a raw milk, semi-cured cheese and is aged for at least 3 months. Whilst the cheese can be aged for longer, at this profile, the cheese has a wonderfully zesty quality. Our cheese is selected from the Subaida farm, a family farmhouse cheesemakers who take great pride in looking after their animals. The cows are even played music during milking!

This cows' milk cheese is named after the natural port of Mahón on the island of Menorca off the Mediterranean coast of Spain. Menorca’s cheese production tradition dates back to 3,000 BC. The island of Menorca is famed for its skillfully bred cattle and is one of Spain’s highest dairy producing regions, with over 600 dairy farms.

In 1985 the cheese from Mahón received the Denominación de Origen. According to its PDO, Mahón Cheese can be made either from raw or pasteurized cow’s milk. Its distinctive taste is due to unique soil, temperature and humidity – all characteristics of Menorca Island. Additionally, cows in Menorca can roam freely on fields limited by particular dry-stone walls which are typically native to the island.