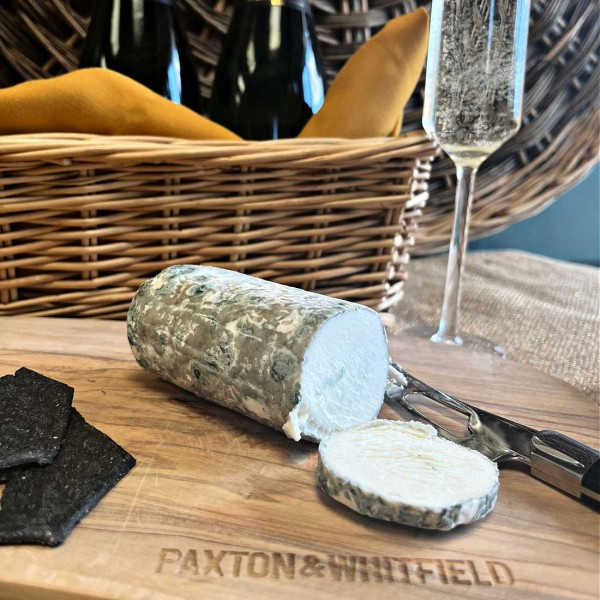 Elrick Log is a soft, lactic goat's milk cheese that develops a delicate mould rind after being rolled in ash. The cheese has bright and citrusy flavours, with a hint of spiciness which develops with age. The texture is smooth and creamy with a fudgy centre.

Elrick Log is hand-made by Errington Cheese in South Lanarkshire at the foot of the Pentland Hills in the Southern Uplands of Scotland. They are a small, family-run farm and cheese company started by Humphrey Errington in the early 1980s. The Family originally moved from Dumfriesshire to Lanarkshire in 1981, running as a mixed farming enterprise of beef cattle and sheep. Today, in addition to their flock of Lacaune and Friesan cows, the farm now homes around 100 goats, a mixture of Saanen, Toggenburg and Alpine breeds, whose milk is used to make Elrick Log.

When Humphrey Errington moved his farm in the 1980s, he sought to reinvigorate the rich tradition of sheep's milk cheese in the upper Clyde area. Today, Humphrey's daughter Selena Cairns continues the cheese-making duties and is one of the very few cheesemakers in the UK, who continues to make cheese with both sheep's and goat's milk. Selina developed Elrick Log along the lines of the French Charente Poitou styles with their thin rinds breaking down to become soft around the edge and fudgy in the centre.

A crisp and zesty Sauvignon Blanc pairs perfectly with the fresh and citrusy flavours found in Elrick Log.