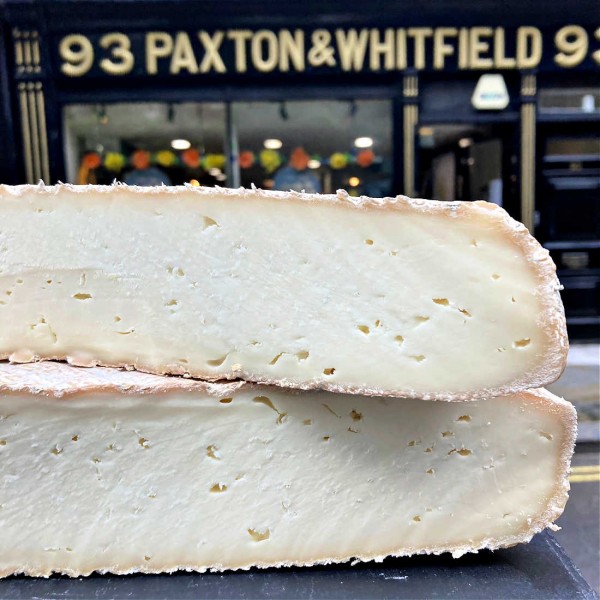 An unpasteurised, washed-rind Ewes' Milk cheese which has a savoury and creamy flavour and a springy texture.

St James is a raw milk, semi-soft, washed-rind Ewes' milk cheese, made with Holker Farm indigenous starter culture. This batch was handmade at the beginning of April 2022 with spring milk. The flavour is savoury, with a creamy, yoghurt-like acidity and a smooth and unctuous texture. The cheese has deep malty notes from the rind, and a really pleasant milky freshness from the paste The rind contributes an earthy and nutty flavour.

This delicious, soft cheese is made by Martin at Holker Farm in the Lake District. Martin began by working with acclaimed cheesemakers such as Mary Holbrook and Graham Kirkham of Mrs Kirkham’s Lancashire. Confident that he had the tools to succeed, along with partner Nicola, he set up at Holker Farm in the Lake District and began to produce something unique to the UK: a washed-rind ewe’s milk cheese.

This cheese is seasonal, with milking from early spring to late autumn. It's made daily from the warm, unpasturised milk of Martin's flock of Lacaune ewes. The ewes are free to roam and feed on the diverse pasture that surrounds the far­m in Cumbria. For a period of three to four weeks the, cheeses are individually washed and turned in a brine three times a week. This allows them to form that striking orange-yellow rind that contributes so much to the taste.

Cote De Duras Merlot Cabernet Full Bottle
Cote de Duras Red Wine for Artisan Cheese Youthful fruit characterises this wine from Cotes de Duras, but it is balanced by depth of flavour making it an excellent wine for all occasions. Merlot predominates. Only available to...
Details
Artisan Biscuits for Cheese - The Cheeseboard...
Artisan Biscuits for Cheese - The Cheeseboard Selection The ideal accompaniment to your artisan cheeseboard and each selection box contains plenty for 6-8 people. Paxton & Whitfield Artisan Biscuits for Cheese are produced by an...
Details
Paxtons Cheese Sharing Board
This large acacia wood cheese board is has two handles; making it perfect for sharing and passing round the dinner table. The board features bevelled edges, a beautiful tactile finish, and is branded with the Paxton & Whitfield...
Details
Paxtons Cheese Knives Set of Two
Cheese knives designed for artisan cheese A set of two Cheese Knives with stainless steel blades and riveted rosewood handles. The soft cheese knife has holes in the blade to ease cutting through the stickiest of soft cheeses and...
Details
Caramelised Onion Chutney
This chutney offers a full bodied sweet and piquant flavour and is ideal when served warm or cold with cheese or meats. The rich flavour is achieved by slow cooking and the choice of ingredients.
Details