Paxton & Whitfield was first recorded as a partnership in 1797, but its origins began in 1742 when Stephen Cullum set up a cheese stall in Aldwych market. As London became increasingly affluent Sam Cullum (Stephen's son) moved his cheese business closer to his wealthy customer base, near to Jermyn Street where there is still a shop today. He also took on two new partners - Harry Paxton and Charles Whitfield. Ironically it is their names, not his, which grace the shop fronts now. The Company's reputation grew steadily, culminating in 1850 with the honour of being appointed cheesemonger to HM Queen Victoria. It was the first of many Royal Warrants that the Company has held. 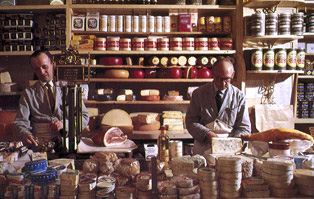 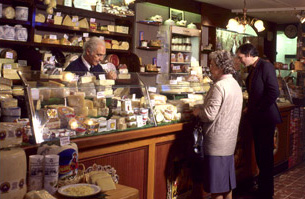 While the earlier years were good for Paxton & Whitfield, times were tougher from the 1860s. Smart society's appetite for traditional English farmhouse cheese was fading in favour of Continental cheese and, in England, factory style production was becoming the established practice. Many artisan cheeses totally disappeared as small farmers sent their milk to industrial creameries. This trend continued throughout the two World Wars and, in the 1940s, with eggs, butter and cheese in short supply 93 Jermyn Street became an ordinary grocery shop.

After World War II and a series of different owners, business improved as Paxtons rekindled their contacts with the traditional cheesemakers of rural Britain and started bringing in the best that Europe could offer. Two new Paxtons opened, in Stratford upon Avon and Bath not to mention their virtual shop on the web. Customers who value quality know they will always be able to find it at Paxtons. As Winston Churchill once observed "a gentleman buys his cheese at Paxton & Whitfield". In Paxton's third century of trading we hope you will allow us to help you enjoy the fascinating and diverse world of cheese too.

Significant dates in the history of Paxton & Whitfield

The concept of the Royal Warrant of Appointment dates back to the advent of the monarchy. The King and his Court had to be provided for and, not surprisingly, had first call on the services of the best in the land. In return, being a Royal Tradesman conferred certain trading benefits over those not recognised. By the 15th century, Royal Tradesmen were formally appointed in writing by means of a Royal Warrant issued by the Lord Chamberlain, a practice which continues to this day.

Paxton & Whitfield gained their first Royal Warrant to Queen Victoria in 1850 and today we hold Royal Warrants of Appointment to Her Majesty The Queen, and HRH The Prince of Wales.