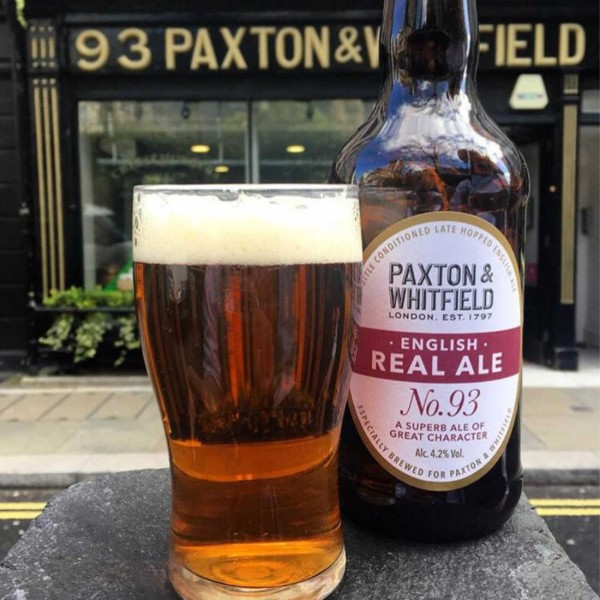 A superb ale of great character. Golden colour with a spicy hop character, soft fruitiness and some strength.

A superb ale of great character. Golden colour with a spicy hop character, soft fruitiness and some strength. A great partner to cheese. Only available to customers aged 18 and over.

Our No.93 Ale is brewed by ex-Brakspear head brewer Peter Scholey. In 2002 Brakspear (famous for the double-drop fermentation method) ceased trading and Peter set up a “cuckoo Brewery” called the Beer Counter, overseeing the production of his own brands & others including the famous "Coniston Bluebird". No.93 is produced for us by Hepworth's (also known as The Beer Station) in Horsham, Sussex.

No. 93 is a “bottle-conditioned” beer. This means that a secondary fermentation happens in the bottle due to the live yeast being left inside (rather than filtered out as it is in more commercial brands). This slows the breakdown of the compounds in the beer giving it a much longer shelf life than a filtered beer. The fermenting yeast also naturally carbonates the beer so no high pressure gas injection is needed.

It is quite a “hoppy” beer. The English leaf hops really show through, specifically in the aroma, but also in the flavour, however this is well balanced by the Maris Otter malted barley that is used.

As it says on the bottle “a golden light and refreshing beer, the perfect partner to a cheese ploughmans”