The Story of Stichelton Cheese

We sent our Operations Director, James Rutter to Nottinghamshire to interview Joe Schneider; the American cheesemaker who moved to the UK and brought back this historical Stilton recipe made with raw milk – the cheese that we know and love today as Stichelton. You can also listen to the interview in full on our Podcast.

“Joe, tell me about Stichelton”

“Most British people would be very familiar with the traditional blue cheese called Stilton. We don't make Stilton, we make Stitchelton. In its early days, Stilton would have been made on farms with raw milk. The last raw milk Stilton became extinct in 1989; Colston Bassett were the last members of the PDO group who were making it. They stopped voluntarily in 1989, because at that time raw milk was seen as somehow riskier and more dangerous than pasteurized - but we've moved on a lot in 20 years…

We asked for permission from the Stilton Makers Association to make a raw milk Stilton, but that was denied. So, we make Stichelton - a traditional blue cheese made on our farm, with raw milk. It's a naturally rounded cheese with a good balance of blue and taste; it’s creamy and very piquant. One of the things you notice is its complexity because of the raw milk.”

“The reasons for using raw milk are obviously important to you. What effect do you think that has on the cheese and how do you manage that on a on a day-to-day basis?”

“Well, raw milk cheese making is very important to me philosophically. You can think of food as simply fuel; something you need to eat, and you're not too engaged with. But, if you are engaged with it, cheese making is a brilliant example of how all the connections of food and farming go together into something you can eat. You can taste it… If you look out of that window, you see cows, you see grass and fields, you see wet weather, you see the farmer out there and all those things go into producing milk. So what fields are growing? What grasses are growing? What the weather's like? What breed of cows we have? How healthy our cows are? How they're looked after? All of that goes into it.

Even the people that are involved. So, the guys who know the animals and how they milk them - all of that ends up in my vat as an expression of what's happening outside that window.

I don't simply want a fat and protein substrate. I want a living product that comes from the place that we are on a farm. We're like the single malt of cheese making; you only have your milk, which you have control over. You know it intimately, you know your climate, you know your “terroir”; that's an overused word, but it has a lot of resonance for me.

Philosophically, I have trouble with that idea of cutting those connections because you worked so hard to make them. What I'm talking about is that the flavours that come through in the milk; the enzymes in the flora; the natural bacteria that are living in the atmosphere and on the cows udder that produce the complexity of flavours that traditional cheese making gives you. For me, the whole thing boils down to not only the flavour, because you get more flavour with raw milk cheese, but how that flavour is connected to where you are at with your farm and your craft.”

“How important is instinct to you when making cheese? You’re working with a variable product in your raw milk. How much of it is scientific evidence and how much of it is your instinct?”

“When I first started making cheese, in 1995 in Holland, one of the things that I immediately found attractive was this mix of good, hard, empirical science and alchemy.

There is a lot of science in cheesemaking; chemistry, microbiology that I really like. It suits me. But then there is also experience and an empathic feel. If you're a carpenter and you're working with wood, you just understand how the grain works when you're carving. If you're working with metals, you understand what different metals do. It's the same with milk, with cheese making. You have sort of an instinctive feel for what it is and how it works and how it's going to behave; backed up by lots of good, hard science. So, I love those old boys who probably never knew what a “flocculation time” was or, a C-18 protein chain. But they knew implicitly what made their cheese work and their milk work."

“So, how did you arrive at the name Stichelton?”

“Well one of the customers came in and he was a nice old gentleman who belong to the ‘Society of Ancient Place Names’. He came in and said, well, you should call your cheese Stichelton, because that is the old Anglo-Saxon name of the town of Stilton from this ancient document called the Lincoln Rolls. And we thought, ‘wow, that's pretty cool’."

“How much cheese do you make here at Stichelton on an annual basis?”

“About 45 tonnes, which might sound like a lot. But in the cheesemaking world, it's very, very small. The biggest cheese makers in this area are doing six thousand tonnes a year. So, we're hardly even on the radar."

I have no ambition to make six thousand tonnes now. I'm a bit of a square peg. I don't want to grow my business for growth’s sake. I like making cheese. I've got other people that work with me that can make a vat of cheese, but I make 85-90% percent of the vats and I enjoy that; that's what motivates me. I don't want to run a business where I just sit at a desk and receive reports about the yield.”

“It's also quite rare for a cheesemaker to only make one cheese on the farm. And yet you're focused entirely on only making Stichelton. Why don't you make other different cheeses? And how do you continue to remain focused making the same cheese day in, day out?”

“When I was a young man looking at being a cheese maker, the people who I admired the most were making one or two cheeses at the most. So, Kirkhams Lancashire. Jamie Montgomery’s Cheddar, Applebys Cheshire. Pretty much their whole focus was on one thing and doing it really well. And that appealed to me. I know a lot of people who make cheese and they have two, three, four or 18 that they do and they can do that well. But for me I focus on one thing and that's more attractive to me. Maybe I have a dull personality, so I don't need lots of distractions. It's hard enough just trying to make Stichelton good.” 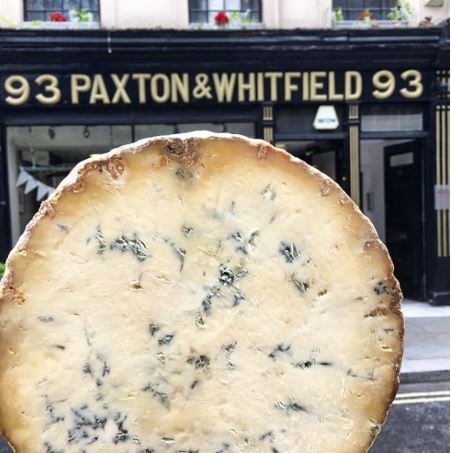 You can order Stichelton cheese online and in all of our Paxton & Whitfield shops and taste the full flavours from Joe's Nottinghamshire farm. Particularly delicious paired with our vintage port.