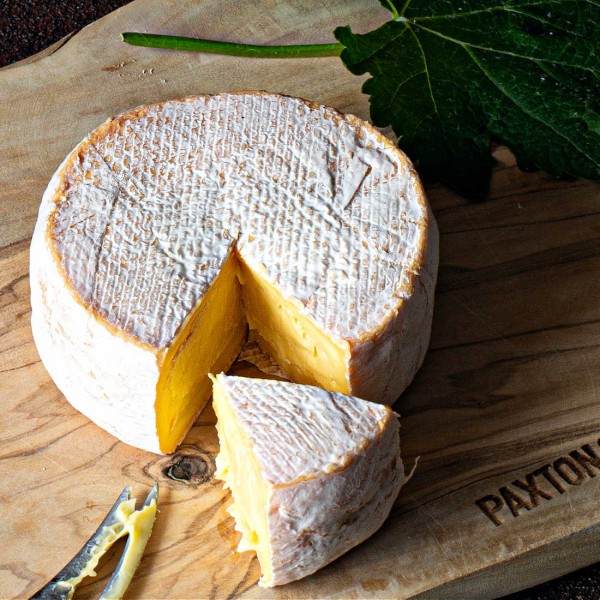 A semi-soft, washed rind cheese made from thermised Channel Island cow's milk. Tangy and punchy in flavour, with a buttery texture.

Mini Maida Vale is a semi-soft, washed rind cheese which is made from Channel Island cows' milk and washed with Treason IPA from Uprising Brewery in Windsor. The IPA beer helps to promote a pungent, tangy flavour in the cheese whilst maintaining a buttery texture. It is a fully-fledged British cheese at its finest.

Village Maid Dairy has been a pioneer in the British cheese industry for decades, founded by Anne Wigmore (a former dairy scientist) and her husband Andy Wigmore in the 1980s. In 2017 their son Jake and his partner Kayleigh joined the business and set about creating a new cheese – Maida Vale. This soft, washed rind cheese is produced using Guernsey cows' milk from the biodynamic Heckfield Park Farm, located less than two miles away from the dairy and then washed in a craft IPA. Over lockdown we commissioned Jake and his team to create a ‘baby’ version of this delicious cheese exclusively for our Cheese Club. Due to its popularity, we have added the Mini Maida Vale as a limited-edition cheese to our website.

Maida Vale cheese was awarded Two Stars at the Great Taste Awards 2018 in its first year of distribution and again in 2019.

Ale No 93
A superb ale of great character. Golden colour with a spicy hop character, soft fruitiness and some strength. A great partner to cheese. Only available to customers aged 18 and over. Our No.93 Ale is brewed by ex-Brakspear head brewer...
Details
Artisan Biscuits for Cheese - The Cheeseboard...
Artisan Biscuits for Cheese - The Cheeseboard Selection The ideal accompaniment to your artisan cheeseboard and each selection box contains plenty for 6-8 people. Paxton & Whitfield Artisan Biscuits for Cheese are produced by an...
Details
Red Leicester - Sparkenhoe
Raw Milk Farmhouse Red Leicester Cheese The flavour of the cheese is nutty and complex, with deep caramel and liquorice undertones which completely set this cheese apart from generic Red Leicester. Annatto, a natural...
Details