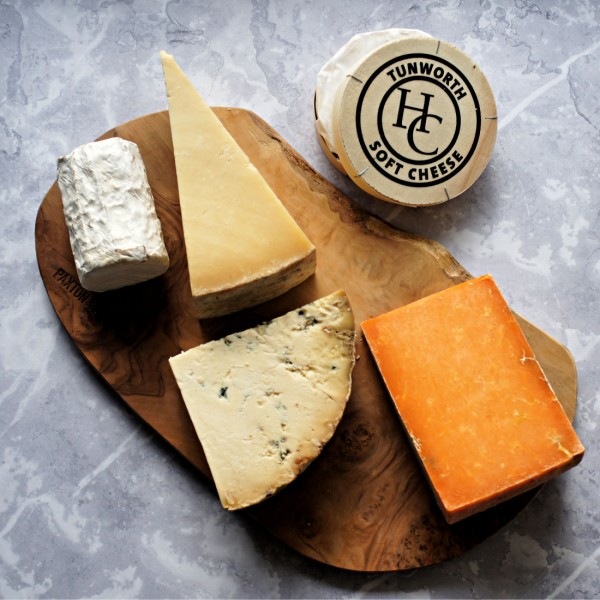 A selection of larger sized pieces of some of the tastiest artisan cheeses from England.

A delicious selection of English cheeses; featuring a hard, soft, blue and goats' milk cheese. A delicious, artisanal cheese course with larger cuts of cheese to serve 14-18 people - or serve fewer people with plenty of leftovers to keep & enjoy.

This cheese board selection contains:

Montgomery's Cheddar 500g (Unpasteurised Cows' Milk, Traditional). Cheesemaking at the Montgomery's farm in North Cadbury, near Yeovil, is one of the very few remaining examples of how Cheddar was made in the 19th century. You should find the cheese to be full flavoured, and at 18 months of age or thereabouts, to have developed a depth and complexity of flavour which has few rivals. There are variations of taste from one day's production to the next depending mainly on the pastures the cows have been grazing and the starter culture used.

Stichelton 500g (Unpasteurised Cows' Milk, Traditional). Joe Schneider makes this cheese on the impressive Welbeck Estate in Nottinghamshire to a recipe similar to Stilton, although it cannot use this name due to being made with unpasteurised milk. The flavour is immensely buttery with a nutty mellowness. This is due, amongst other things, to the high quality of the milk which comes from an organic farm on the same estate.

Aldwych Goat 215g (Thermised Goats' Milk, Vegetarian). A firm textured goats' milk log with a characterful flavour. Perfect for cooking as well as enjoying as part of a cheese board. Made by Pete Humphries of Whitelake Cheese in Somerset.

The Essentially English Cut Cheese Collection fits in a Medium Gift box. Purchase the board and knives separately to complete the look.

Stichelton
Cheesemaker Joe Schneider (previously of Daylesford Organic fame) and Randolph Hodgson of Neal's Yard Dairy joined forces in 2006 to make a new cheese. Their aim was to produce a classic blue cheese using a traditional Stilton recipe...
View
Cheddar - Montgomerys
Montgomery Cheddar is made by Jamie Montgomery in North Cadbury near Yeovil. The Montgomery family are third generation farmers and make one of very few remaining examples of how Cheddar was made in the 19th century. Jamie has indeed...
View
Aldwych Goat
Made by one of Paxton & Whitfield's favourite cheesemakers in the heart of the Westcountry, using the unpasteurised milk from the dairy's own herd of white Saanen, brown and white Toggenburg, black and white British Alpine and...
View
Tunworth
Tunworth is a handmade pasteurised cheese. It has a delicate, thick rind with a rich, creamy yellow interior that gently oozes but doesn't run away. Whilst there is a slight bite to the rind, the centre melts in the mouth and the two...
View
Featured Item!
Red Leicester - Sparkenhoe
Sparkenhoe is being made on a Leicestershire farm, something that has not happened since 1956, therefore this cheese is the ONLY Leicester to be made on a farm with raw milk in Leicestershire. Leicester cheese was made on Sparkenhoe...
View