History of the Ploughman's Lunch

Seen as a classic pub fare and best enjoyed with a pint of English Real Ale, you would be forgiven in thinking the Ploughman’s lunch harks back to pre-industrial days. However, the term ‘Ploughman’s Lunch’ is believed to have originated in the 1950s, as part of a marketing campaign to encourage the British public to eat more cheese after years of wartime rations (a campaign we would have wholeheartedly supported). Of course, the lunch of bread, cheese and beer was not invented in the 1950s and these ingredients have been combined in the English diet since time began, or at least since the English have made cheese.

The earliest mention of this traditional combination is from 1394 where Pierce, the Ploughman’s Crede (a rhyming poem) cites the traditional ploughman's meal of bread, cheese, and beer. Bread and cheese formed the basis of the diet of English rural labourers for centuries: skimmed-milk cheese, supplemented with a little lard and butter, was their main source of fats and protein, with onions as the ‘favoured condiment’.

So how do you create the perfect Ploughman’s Lunch?

An essential part of the Ploughman’s lunch are the pickled onions, and Paxton & Whitfield do a fine line in pickled onions too. Perfectly spiced in sweet vinegar, these onions add the required tang to your plate. 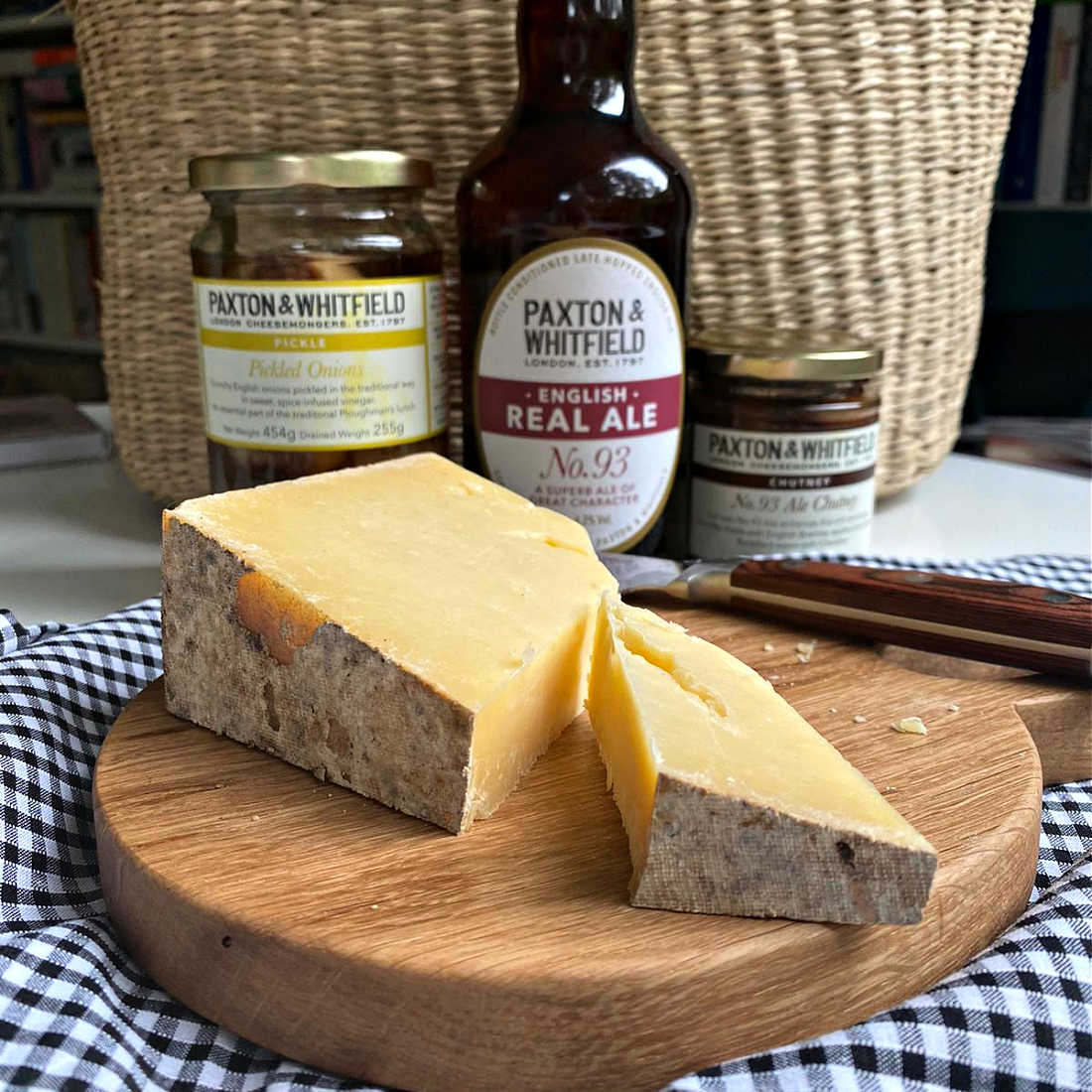 Pick up some bread from your local bakery; we are partial to a sourdough baguette but could be persuaded to include a slice of a good rustic country bread instead.

And finally, the extras; some people insist on ham (we would not be so prescriptive), but we do like a dollop of pickle, our Number 93 Ale chutney does the job. A few slices of apple and a nice heap of watercress add some greenery to the plate. And it would not be a Ploughman’s lunch without a generous slice of salted butter.

Assemble the plate, pour a glass of ale (Paxton and Whitfield Number 93 Real Ale, if you are asking) and dive in. Simple. Delicious. Heaven. 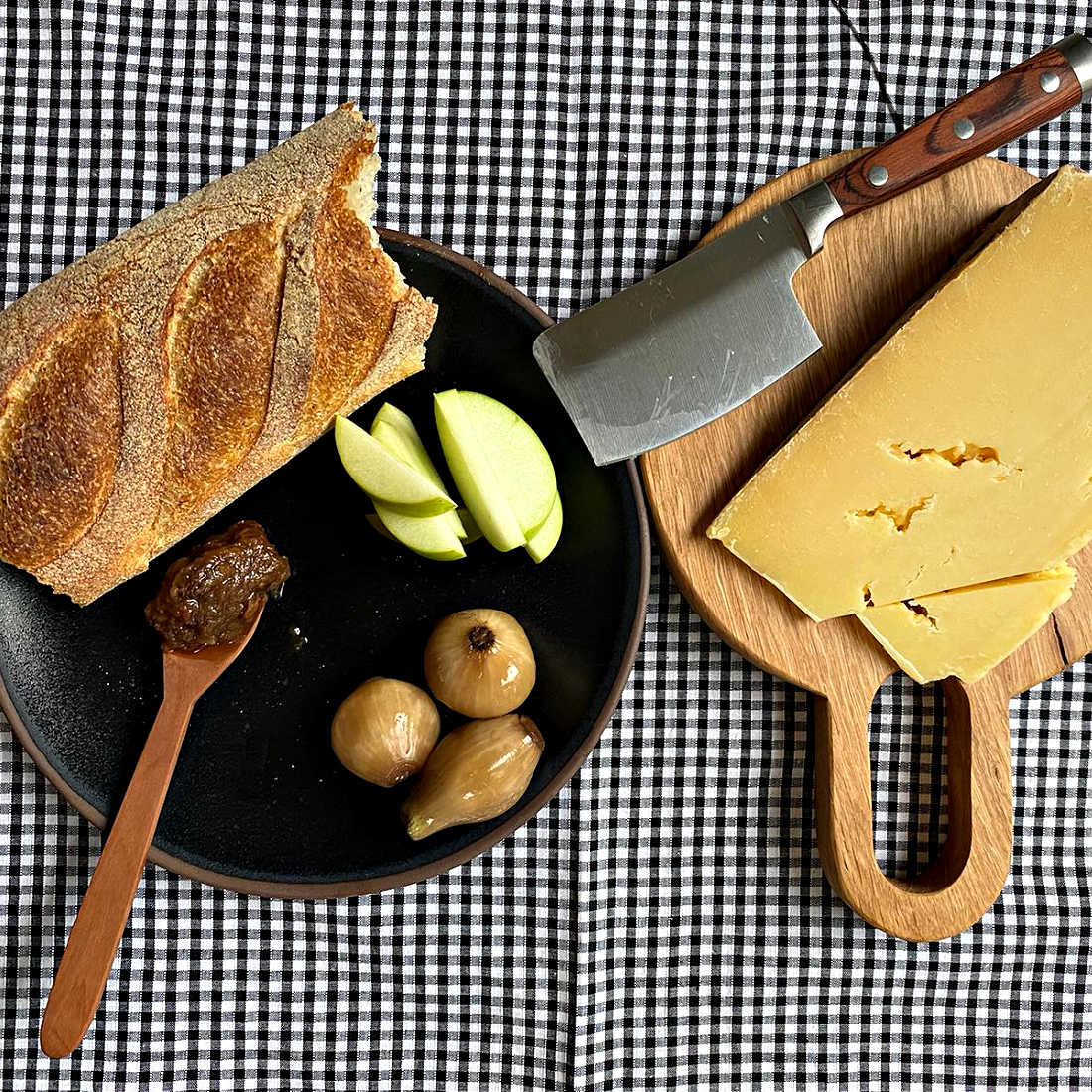 Tags: Ploughman's Lunch , How to create a Ploughman's Lunch, Paxton & Whitfield Ploughman's
Related products
Cheddar - Montgomerys
Westcountry Farmhouse Cheddar Made With Raw Milk Montgomery's Cheddar is one of very few cheddars to be made by hand in the Westcountry using traditional rennet, unpasteurised milk and pint starters - something that qualifies it as a...
Details
Ale No 93
A superb ale of great character. Golden colour with a spicy hop character, soft fruitiness and some strength. A great partner to cheese. Only available to customers aged 18 and over. Our No.93 Ale is brewed by ex-Brakspear head brewer...
Details
No 93 Ale Chutney
This chutney shows the best of British products. A truly great handmade fruit chutney married with Paxton and Whitfield's very own English real ale. Packed full of Bramley apples and plums along with a good slug of real ale
Details
Pickled Onions
Crunchy English onions pickled in the traditional way in sweet, spice-infused vinegar. An essential part of the traditional Ploughman’s Lunch. All the onions used in our Pickled Onions are grown on the Narborough Estate in Norfolk.
Details